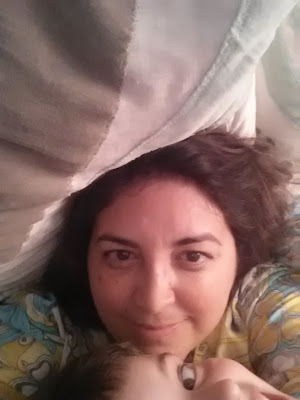 The Brothers are playing a game called "Plaguing" on their devices where their objective is to keep a disease from taking over the planet. I guess I should confiscate their devices and make them read or play Parcheesi, but I'm feeling grateful that there aren't any sounds of violence coming from their room or bickering. If they can be united in their virtual quest to eradicate the plague from the world on a tiny screen, AMEN.

Sophie drank a bit yesterday, under the patient coaxing of Saint Mirtha, so I'm not going to worry about that today. Last night, I lay on her bed and read through page 75 of War and Peace. Sophie was so bored that she fell asleep. 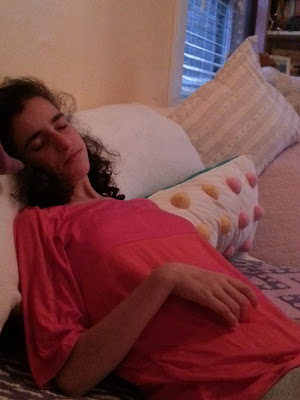 I took the picture at the top of this post last night, as I lay on my bed with Oliver. He tends toward the existential hysteria right before bed, and while there are times when I'm able to talk it out of him, there are other times where I'm hard put to be patient and basically tell him, emphatically, to Be Quiet and Call it a Day! Last night, just after I told him that, he started to laugh and we took the photo and decided that I have a moon face. AMEN.

Henry just showed me that he had eradicated the earth's population and had thus achieved victory on his device. I evidently misunderstood the objective of the game. Clearly, I need to confiscate the devices and force my sons to read or play Parcheesi. AMEN.
Posted by Elizabeth at 9:25 AM