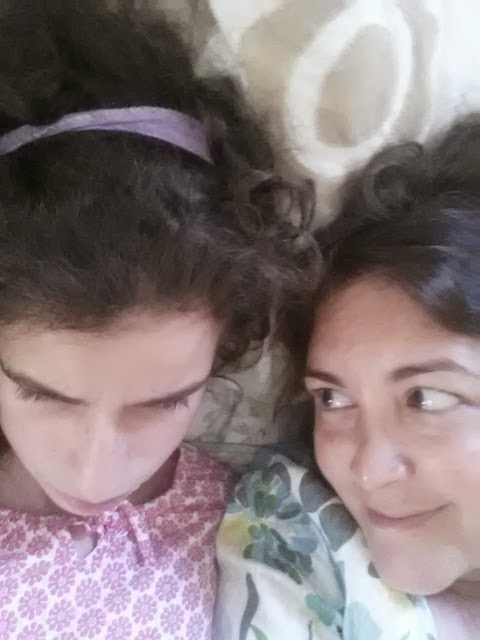 I started the evening last night with the above photo --  I was lying on my bed with The Soph, and we had had a fine day. Soon afterward, Mirtha the Saint came to take care of Sophie, and I got dressed for a dinner out with friends. I drank a Manhattan at my friends' house, a delicious concoction of vermouth and whiskey and a maraschino cherry from Italy that was threaded onto a silver toothpick. I've never had a Manhattan, but I drank it to the very last drop. I sat outside in the cool, Los Angeles evening air, laughing and talking with old friends and new --  four men, actually -- two couples, one being two dads of kids my boys go to school with and the other two older men who have been together since 1975 and are now 77 and 80 years old. I tell you their ages because it was significant. We went to an Italian restaurant in West Hollywood to celebrate my friend's birthday, I ate burrata and tomatoes and then linguine with clams. We drank champagne first and then red wine. We talked for hours and laughed uproariously. One man nudged me, said, He's a good looking old man, isn't he? and nodded at his partner across the table. I was told that my eyes sparkle, and I'm sure they did. I felt completely enamored by these men's love for one another and for the life they live. In two days they are going to be married and then they will go on a cruise to Alaska. I asked whether I could go with them, and I am certain that they'd let me if I were so inclined. When dinner was over, we climbed back into one car, and I sat in the middle of the back seat, between my dear friend and the new friend. We talked and laughed some more. We went back inside my friends' house and drank a perfect glass of port. It tasted like berries warmed up and we talked and laughed some more. After a while one of the older man declared that he was fading, and I realized that I was too, so we said good-bye and walked to our cars. I called out Happy Wedding! as they drove away and nearly skipped to my car. How grand life is! I thought, How lucky we are to live in such a world where two men born in the 1930's can get married and go on a cruise to Alaska. I turned on the radio and felt another frisson of perfection as Mick Jagger sang you can't always get what you want, but you get what you need. I sang all the way home.

My children were up when I turned the key in the lock. Henry said, I hate this country. Zimmerman got off. He killed that boy with a gun, and those people thought it was all right. Henry is so tall, so narrow still, a man in shape only, unfinished, captive. Oliver stood behind him, a nervous smile on his face. I close my eyes, now, and see them both -- my boys -- inside the doorway, their faces blurred, one lined and angry, the other vaguer, uncertain, Mick Jagger's howl still ringing in my ears. I hate this country, he said again, it's stupid.

What does one say to that?
Posted by Elizabeth at 12:34 AM