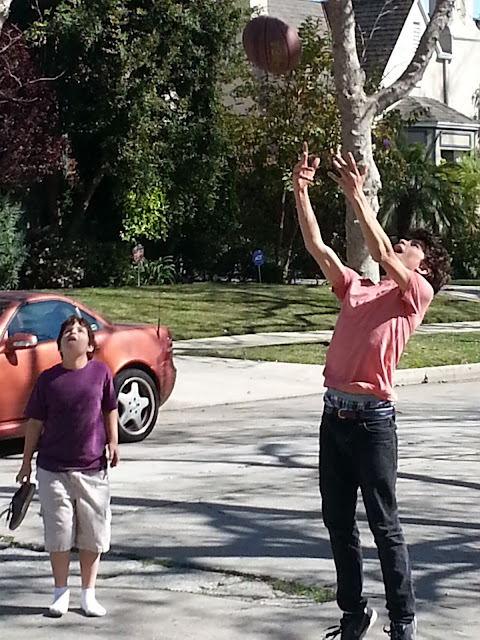 We had a huge showdown in Oliver and Henry's bedroom this afternoon, precipitated by loud thuds, screams, yelling and much carrying on. What ensued was, basically, a family meeting where grievances were, if not aired, then hurled about. There's been hitting happening far too often between my boys -- badgering and badgering, then hitting and punching. High drama, and I'm sick to death of it. The Husband and I tried to remain calm and reiterate our policy that physical responses to conflict are absolutely not allowed, that if provoked one must try hard to walk away. If one is the provoker, the badgerer, one must work harder to cut it out when asked.

And not, of course.

Trayvon Martin was gunned down by an ignorant and probably paranoid, racist security guard. He was not much older than my son when he was murdered. It appears that in Florida and many other parts of the country, there are people who believe that violence solves problems, that one can kill a boy, a man, whomever, if one feels threatened.

It's the only thing that makes him stop, Mom! my son cried out. Should I just do nothing?

Florida's Stand Your Ground law justifies using force in self-defense if there is a reasonable belief of an unlawful threat.

Yes, I said, you walk away before you hit or punch him. You are perfectly capable of walking away.

That's the kind of ground we stand on in this family. And the people who agreed with the Florida jury, who believe that shooting a young and unarmed man is justified, who would crow in delight that the perpetrator would walk away and back to life, are absolutely wrong and base. That such an act would go unpunished in a civil society is vile, and I stand my ground with that judgement.

I asked my boys to consider other ways to express their anger, to work toward kindness. They were reluctant, sullen. But I stood my ground.
Posted by Elizabeth at 5:56 PM