I stumbled upon this blog post from a few years ago, and while the circumstances are different today (and largely unbloggable,) the post spoke to me: 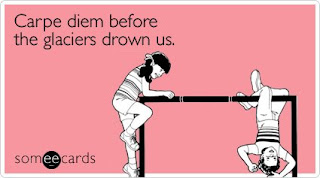 I think it was Mark Twain who said that behind all humor is sorrow.I believe that.I have a good sense of humor, actually, a superb sense of humor. An old boyfriend once told me that I was the person for whom humorists wrote. I liked that comment, felt flattered by it. I guess that means that I appreciate a good humorous anything, although I admit to wanting it tinged with a bit of intelligence (I do hate those gross-out movies and slapstick was never much for me). I giggle like a girl at a couple of my friends' incessant silly jokes (they both write for television), and I don't think sorrow is behind their humor.My sense of humor can be as dark as it gets and is often the only thing that sustains me. I would add faith in there as well, but I think it's more a faith that God provides something for me to laugh at or see the absurdity of, just when I need it.I laugh, therefore I am.That was a riff, I think, on Descartes, but it's Pascal that I really love. I studied Pascal as an undergraduate when I worked on an arduous double degree in English and French literature. I despised French, except for some medieval stuff and, particularly, Pascal.If I saw no signs of a divinity, I would fix myself in denial. If I saw everywhere the marks of a Creator, I would repose peacefully in faith. But seeing too much to deny Him, and too little to assure me, I am in a pitiful state, and I would wish a hundred times that if a God sustains nature it would reveal Him without ambiguity.pensee no. 229And what is all this about? I watched Sophie have what seemed like hundreds of seizures today -- the small ones, the big ones, the drooling kinds, the physical jerking. Etc. I heard the voice of my Chinese doctor in my head along with all the mindfulness training advice and I tried, I really did, to remain calm and mindful, to go with the flow, to not be "attached" in that desperate sort of way. I can do these things, often in a powerful way, but I'm also aware of the thin, thin rope upon which I walk and sometimes hang like a trapeze artist, the rope that threatens to buckle then come loose, then probably snap if I letitit only takes onemisstepand thenthat's it.I'm a wreck, instead of a balancing act.Humor is peeled back and only sorrow shows.Trapeze artists are in the circus, after all. 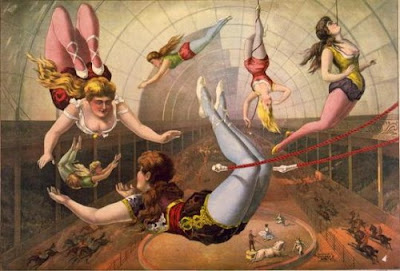