O, would Carlos Danger be John Wilmot, Earl of Rochester 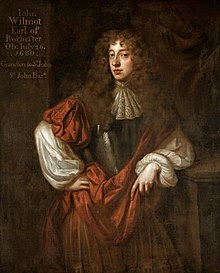 I took down my snarky post of Anthony Weiner the other day, despite the intelligent discussion it fostered. It made me want to take too many showers, squirm too much in the proverbial seat. We doth protest too much. I put it back up this morning, though, because -- what the hell?

This morning, I found the following poem on my poetry calendar, written by an English poet, satirist and courtier of King Charles II's Restoration court. The Restoration was a period in the seventeenth century where the king and his court reacted to the constrictions of the Puritans (and Oliver Cromwell) with hedonism and -- well -- merriment. Charles II had no legitimate heirs, but he did have more than a dozen illegitimate children by scores of mistresses. John Wilmot, on the other hand, died of venereal disease when he was 33.

The poem is startling rich, hilarious in language -- at least to me -- and not a little shocking. It made me wonder whether the lurid texts and photos of today might be the "poetry" one reads in the future.

Reader, what say you?

I swive as well as others do,
I'm young, not yet deformed,
My tender heart, sincere, and true,
Deserves not to be scorned.

Why Phyliss then, why will you swive,
With forty lovers more?
Can I (said she) with Nature strive
Alas I am, alas I am a whore.

Were all my body larded o'er,
With darts of love, so thick,
That you might find in ev'ry pore,
A well stuck standing prick;
Whilst yet my eyes alone were free,
My heart would never doubt,
In am'rous rage, and ecstasy,
To wish those eyes, to wish those eyes fucked out.