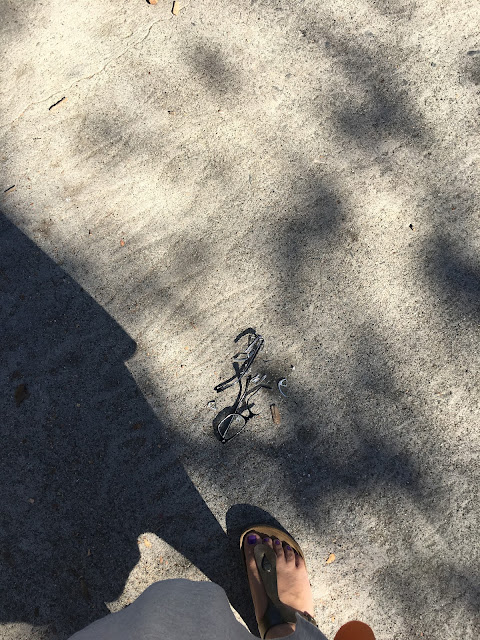 
I bought a very expensive pair of progressive lenses less than a month ago. I have worn glasses for near-sightedness since I was seven years old, and over the last five or so years I've grown increasingly short-sighted as well. My eyes are near-sighted enough that I literally can't see -- say -- an alarm clock from my pillow or my face in the mirror, not to mention five feet in front of me. Outside a radius of perhaps five inches, everything is a blur. I have worn contact lenses for as long as I can remember, but for the last year or so, when I took them out, I couldn't read in bed either unless I placed a pair of reading glasses over my regular glasses. It wasn't a good look, but really only the boys saw me, and I just didn't feel like getting adjusted to progressive ones.

I bought this great pair of progressive lenses and have worn them for about a month and have never seen better. I also have a pair of prescription sunglasses, so this morning I put them on, hung the progressive lenses on my shirt and wheeled Sophie's chair out to the car. It's a bit of a production to fold up her chair and heave it into the back of the car, a daily task that you'd think would give me cut arms (waiting on them) but has, instead, given me a strong back and an even saltier mouth. Cursing helps to mitigate the labor and distract me. Sophie doesn't mind, and I imagine her silence, if broken, would be filled with curses. I dropped her off and then went on my grocery store rounds, drove back home and carried the groceries into the house. I took off my sunglasses and reached into my purse for the progressive lenses and they were, of course, not there. They weren't anywhere in the house, nor were they in my car, and it didn't so much dawn on me but actually hit me with a jolt that they might have fallen off two hours before when I put the wheelchair in the car. I walked back outside and to the street and saw them, crushed and broken into pieces. I felt sort of stunned and then sort of amused, enough to take a photo. I picked up the glasses and the pieces from the curb, brought them inside and burst into tears.

The metaphor of crushed progressive lenses doesn't escape me.