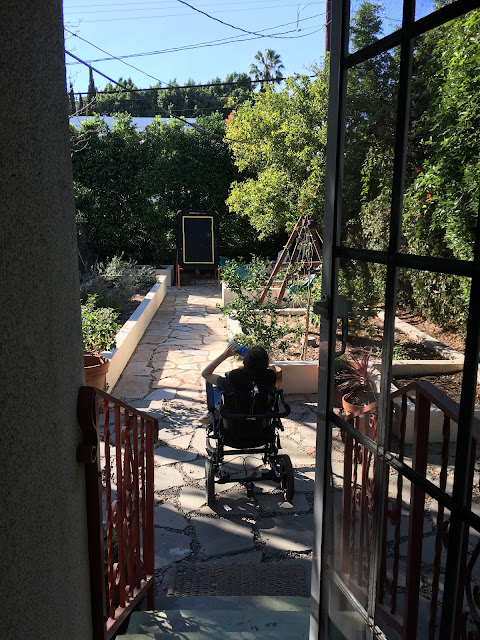 That's Sophie sitting in her wheelchair, gazing at trees. She's finally stopped moaning and humming. I'm not sure why she's been moaning and humming. Is it the impending full moon? Is she constipated? Is something hurting? Has she absorbed the extreme tension in the universe post-election? Has she absorbed the extreme tension in my family due to the election, via me? Is it moaning? Is it discomfort?

She is not having seizures, praise cannabis, and that would include THC. So, yeah, you obdurate fools who don't think THC is medicinal.

She is otherwise dramatically improved from a month ago. It seems hard to believe, yet I am determined to feel gratitude for this respite. That's why despair must not be indulged when things go wrong. Things never stay still. Still, the moaning and vocalizations are constant enough that they put my already extremely edgy self just at the tip of -- well -- falling off. I told the boys as I folded my laundry that when we lived in a tiny New York City apartment and she was a baby and screamed 3/4s of the day due to discomfort from the drugs that she was on, I would have to resort to putting her into her crib or in the middle of the bed, after which I would go into the shower, turn it on full blast and crouch there on the floor, my head in my hands, the tears swirling with the water down the drain. Oliver asked, If that was your life, why in the world did you have us? I told him that never, at any time, did I regret having a baby and that Sophie was a rock star even then and that he and Henry were the reason why I had them. The boys smiled as they ate the pizza that I'd ordered -- things are so hairy around here that I'm not even making lunch these days, much less dinner.

That paints a rosy portrait of two boys, their moaning sister and tense mother folding laundry while eating pizza. It was hardly that as our lunch discussion became a heated and argumentative one as we shared stories of racist incidents that we know about, that affect those we know and love, already, not even at the end of the first week of post-America. We live in one of the largest and most multi-cultural cities in the world. I've got teenaged sons whose best friends include bi-racial kids, black kids, Hispanic, Muslim and Asian kids. Their sister is disabled. They know what discrimination is (the people who use the word retard and then argue that it's just a word, the fact that disabled people were institutionalized in the past, that they face discrimination both subtle and overt everywhere in this country, etc. etc. etc.), but I don't think they have ever seen the kind of overt shit that's going on now, and it enrages and scares them. One of their cousins wept openly about an incident on a high school bus where white kids shouted at black kids to go to the back of the bus. A young black student at UCLA whom we know stopped her car to help a white bicyclist that had fallen off his bike, but he called her a nigger, told her that we don't need your help anymore. We have family members that we literally can't talk to right now, and that's so disturbing and stressful that I can't even write about it.

The boys' first impulse is to fight back, to use violence, and while I know this is talk that comes from teenage bravado and testosterone and feelings of helplessness (and the reason why, I'm sure, young males have been historically exploited to fight wars), I am doing here what I call parenting on the fly. We talk about being alert to increased violence and racism in our community and to being prepared should something arise. We talked about our white privilege. We talked about the importance of non-violence (O.K. I talked about it and they rolled their eyes), and I told them that if it comes down to it --- and they asked me this question -- I would take a bullet but not shoot one.

Yeah, lunch on a Sunday afternoon.

Never have I felt as galvanized or depressed.

I claim to be a master of equanimity, of the ability to hold two opposing or contradictory thoughts or feelings at once, but that's not happening right now. Or maybe it is as I balance fierceness, righteousness, anger and at least a desire to be compassionate.

For every the America we know is dead (usually said, written about or cried by a white person), there is a much more relevant there was never an America.

I'm not sure the rift in families can be repaired.

Posted by Elizabeth at 3:40 PM