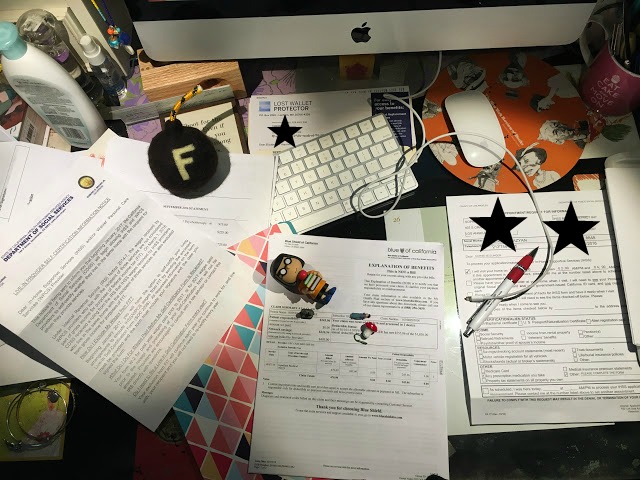 Today was a day of light paperwork, spent mainly in organizing the piles of stuff on my desk. Did I tell you that Henry broke his collarbone in a lacrosse tournament about three weeks ago when I was gallivanting around Mammoth taking pictures of fall color? Did I tell you that it was, of course, the only lacrosse tournament that I have missed and the first broken bone of the boys? I guess the fact that Henry is now 18 years old and has never broken a bone is a good thing, but it was a pretty bad break, and he had to have surgery. He's now somewhat laid up as far as playing lacrosse for a few months but healing otherwise quite nicely. I'm only telling you this to emphasize how much easier it was to take care of business with him than it has been for Sophie. He broke his collarbone and was in pain. He took medication, and the pain stopped. He broke his collarbone and the doctor fixed it. He broke his collarbone and the insurance company didn't question the procedure. Bills were paid. Granted, I received the Explanation of Benefits from the almighty Anthem Blue Shield and practically fell out of my chair at how much it all cost (think five digits for a 25 minute surgery and two-hour recovery at one of the fanciest hospitals in the shitty). But I really can't complain. In the twenty one years of caregiving as the CEO of Sophie, Inc., things have actually almost never run as smoothly. And I mean ever. The thing is I received a stack of Explanation of Benefits (literally a stack because each one came with the requisite three pages that listed the languages they would be available should you need translation) for Sophie's hospital stay that happened the week before the broken collarbone. The stack filled me with the usual dread which I imagine is partly due to PTSD which I acquired in the early days of The Troubles when I had to fight tooth and nail for every bit of coverage. Nowadays, I feel dread and mitigate the dread by quickly placing the stack of papers in a pretty folder. I then place the folder on my desk and set myself the task of only dealing with the folder one time a day until any problems relating to the stack of papers in the folder are resolved. This means one telephone call a day or, at the most, two telephone calls a day if I am referred to someone else for the same problem.

That's a caregiver tip: Pick something, anything and deal with only that something, anything. When you hit a wall, put it away for the day. This tip will, of course, not work for all problems related to the caregiving of your disabled child or adult, and if you're in, say, the first decade of doing this stuff you might have the stamina to do multiple things, but I'm warning you it (your stamina) won't last forever and nor will your sanity, your marriage and your general goodwill toward the universe.

The other papers that you see above are also related to my job as CEO of Sophie, Inc., and they address the upcoming IHSS social worker meeting, and the Department of Social Services' changes to the IHSS tax reporting laws. I've covered all identification with my alter ego Marcie figure, a tiny mushroom, a pen from Quicken Loans that appeared on my desk, a few black stars from the PicMonkey app and my beloved F Bomb that my friend Cara gave me for my birthday.

If you're still reading this exceedingly boring post, congratulations. I'll reward you with a picture of where many of these papers will be transferred and sit for many months before being filed in one of the filing cabinets in my house. 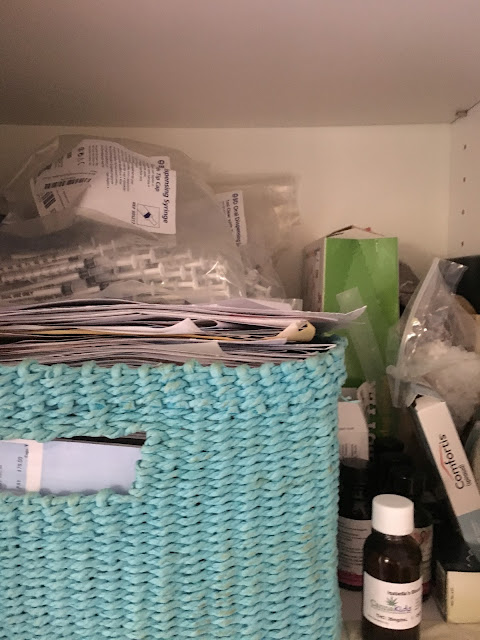 You'll notice some plastic bags above the blue basket that holds the papers. These are filled with 1 ml syringes that I use to administer the CBD and THC that Sophie gets. In fact, you can even see the bottle of THC that I store right there, too, across the kitchen from the CBD bottle, so they are not mistaken for one another. Reader, you might ask why? That little bottle of THC is far more potent than the little bottle of CBD, and if the contents of the blue basket begin to really stress me out, I can quickly take a swig and be on my way. 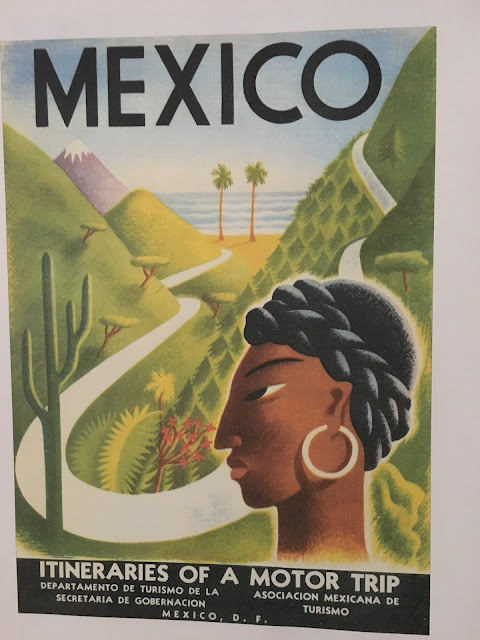 Posted by Elizabeth at 2:35 PM