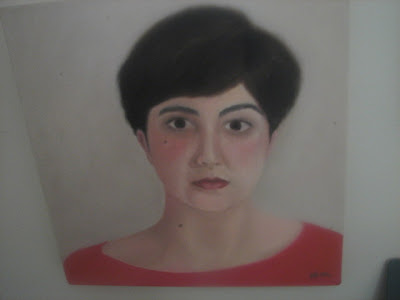 Last night I drove to Culver City to a gallery called indie collective to see a show of artwork by my friend Susan Arena. You can see her work here.

I don't own any "real" art. The kind that you really go look at and then buy. The "good" art that I do have has been either given to me or it's just something that I like and spend virtually nothing on. Like the above posted portrait. It's me when I was pregnant with Sophie. My friend, Jessica King, painted it in her apartment in New York City. I was so happy pregnant and remember sitting for long hours while Jessica dipped her brush in the ink and periodically brought us both tall glasses of mixed juices to drink. I remember thinking that she was painting my last face before being a mother. She told me that I had amazing pink cheeks. When my boys look at that face, they say that I look funny. Different. And I was.

I love Susan's art because it's got a haunting mix of the sweet and the ominous. For years I've wanted to own something by her. It was a strange night last night in Los Angeles. The air had suddenly turned cooler in the late afternoon, and the sun disappeared, melting into gray. By nightfall, the air was wet and misty and when I drove to the gallery I could hardly see through the fog. It seemed to be rolling in from the west, the ocean, and I was driving toward the coast. The gallery was tiny and fairly crowded and I talked a little to Susan and some of her friends. I kept staring at the row of paintings and works on paper, neatly arranged on one wall. I was drawn to their almost folkloric beauty but felt nervous around them, as well. I think the nervousness came, though, from excitement -- I knew I was going to buy something and knew, too, that I probably shouldn't spend the money.

I bought a painting that is pink and white and has a small house and flowers coming out of the roof and a tiny, ominous black fox on the pathway leading up to the door. Underneath it says SWEET. It's mixed media -- a bit of collage and fabric and paint and is about 12" square in size. I don't have a picture but when I get it, I'll post what it looks like.

I'm giving it to Michael for Christmas as a surprise. Home Sweet Home.
Posted by Elizabeth at 12:17 PM