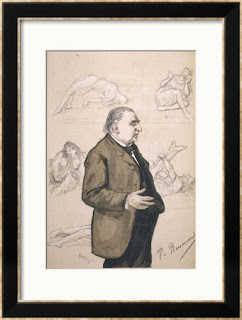 Jean-Martin Charcot (1825-1893),the French Neurologist with Some of His Patients Depicted in the Background

Our Neurologist is new. She's got a strange name and a strange, beautiful face. She is young and thoughtful and would probably be my friend if she weren't The Neurologist. I took Sophie to see her today because I was up last night trying to keep myself calm while Sophie seized for the better part of an hour. At 2:30am. Now, for those of you unfamiliar with the hundred and one ways to have a seizure (and I do believe Sophie has had them all), the type seizure Sophie has for an hour isn't the kind of lose-consciousness, jerk and drool thing that most people think of when they think of epilepsy. The kind that Sophie has and that woke me up from a sound sleep beside her was a very physical, violent thing. I woke up because I took a hard right in the face. The seizures are spasm-like and happen one on top of the other and are interspersed by wild rolling and flailing. Her legs shoot out and her arms fly sideways. Sometimes she flips completely over and rolls onto her stomach. Like I said this goes on for the better part of an hour and in the beginning I just try to hold her and keep her and me from getting hurt. I usually then start to get frustrated and mutter some imprecations and then I start praying about mercy and then I usually try to breathe in and out (Thich Nhat Hanh says: Breathing in I calm myself, breathing out I smile) and then I sort of lie down next to her and hope for the best.

I'm thankful that when all this happens I'm with her, that she's not alone.

Then we go back to sleep.

And ironically, we had a visit to The Neurologist scheduled today. She didn't have much to say but nodded sympathetically and defined the type seizure it sounded like. Evidently, it's coming from the frontal lobe and I didn't catch the rest.

It looks like we're headed for an overnight EEG sometime in December. Just to see what's going on, she said.

Going on fourteen years and we're still trying to figure out what's going on. But the good doctor Charcot (see picture above) doesn't look like he's too happy with what's going on in neurology, either, and that was over 150 years ago.

Docteur, tant pis pour elle (roughly translated, it means Doctor, too bad for her, and it's an actual line from a memorized dictation in my high school French class).
Posted by Elizabeth at 8:10 PM