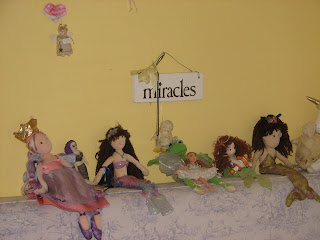 I haven't written about Sophie in a while. She's all right -- been through a rough patch, but the week before that she had a wonderful, easy time of it. This is an excerpt from the book I'm writing -- something that happened several years ago and on this smoky, hard-to-breathe day when we're all cooped up inside, I thought it was fitting. 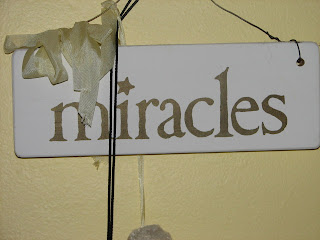 COWBOYS AND THE VIRGIN MARY

Sophie’s brothers, Henry and Oliver, have a cowboy-themed bedroom. The windows are covered with red shades, patterned with tiny, black bucking broncos, the cowboys holding on exuberantly. Hooks on the wall, shaped like horseshoes, hold straw cowboy hats and a lampshade is held aloft by a rustler’s lariat. Cowboys in various antics pose or dance on the walls, careful to avoid the cactus that they are interspersed with. At night the boys climb into their respective bunks and wrap themselves in cowboy sheets. They are sweaty sleepers, kicking off their covers, muttering verbs, emphatic even in dreams. Next door, Sophie sleeps in yellow and lavender. Fairies fly gracefully on the walls; a delicate mobile of angels holding a small sign that says “Dream” hangs from an air-conditioning vent. A white wooden plaque reads, “Send miracles” and an evaporating bottle of holy water from Lourdes sits prominently on her dresser. Sunshine spills through three windows and when Sophie lies on her purple beanbag she watches the palm trees in the back yard, swaying. Yellow and lavender are colors to soothe the soul, or so they say. But it is Sophie’s mind that needs soothing and, so far, no color has succeeded in quieting the constant seizures that she suffers.
Recently, after a precipitous decline in her ability to walk, eat and drink, it was discovered that Sophie was having seizures during 90% of her sleep. These were sub-clinical, we were told, nothing that you could see. The angry brainwaves, though, were clear enough on the overnight EEG to qualify the diagnosis of a new, particularly rare form of epilepsy and accounted for the dramatic regression in her motor skills. We could now add Electrical Status Epilepticus in Slow Wave Sleep to Sophie’s official diagnosis of Seizure Disorder of Unknown Origin. The treatment is an intravenous immunoglobulin infusion, often used by those with autoimmune disorders but rarely by epileptics. Since the trouble started, Sophie has lost almost twelve pounds from her already slim frame. She is walking, again, but her brain seems to have forgotten how to eat. We have to puree her food, now, and literally coax it into her mouth, massaging her cheeks and encouraging her to swallow.
The boys are naturally aware of the stepped-up tension in the house, but because they are younger than Sophie, her seizures, her crises and ups and downs are as familiar as the dancing cowboys they open their eyes to every morning. Henry, the oldest, is in kindergarten at a neighborhood Catholic school. He has become a “God-squadder” of late, talking frequently of keeping God’s world clean and praying for small achievements, like successful tree climbs. While I was raised Catholic, I would call myself an ironic Christian now, and Henry’s religious chatter is sweet but sometimes tedious. One night, Henry and I read together in Sophie’s room. Oliver had already fallen asleep and Sophie lay seemingly asleep in her bed. We were interrupted by the guttural groan she utters before having a large seizure. I dropped the book and Henry ran to get a tissue to wipe her drool. I anxiously bent over her, murmuring that it was alright, it was alright, but it really wasn’t alright. Sophie had had at least five of these big episodes during the previous fifteen minutes and I decided to page a neurologist on call. While I waited for the phone to ring, Henry climbed into my lap.
“Are you nervous a little bit, Henry?” I asked.
“A little,” he admitted.
“I am, too, but everything will be alright. Sophie’s doctors and we are taking good care of her.” The phone is silent.
Henry says, “But only God can help Sophie.”
I say, “Well, God will work through the doctors if they pray to Him.”
Henry says that God is “in here,” and he points to my heart.
“Yes,” I whisper.
“You have to be very quiet to hear Him. The doctors have to be very quiet to hear Him. Tell them, Mommy, tell them to be quiet and listen, “ he insists and stares, brown-eyed into my eyes. The phone rings. 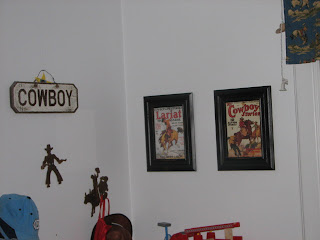 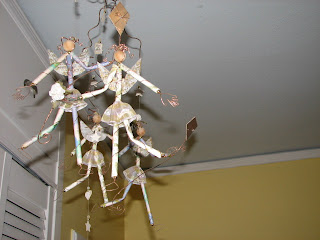 Posted by Elizabeth at 4:14 PM