The Things We Do

I think I mentioned that I'm the leader of my seven year old's Cub Scout den. Don't ask how and why I got suckered into this exhausting position, but I'm actually enjoying it despite my complete and utter lack of knowledge about anything that has to do with scouting. At the beginning of the year, the Pack Leader, a large man with an even larger heart and a scouting agenda that makes me quail in fear suggested that all the Den Leaders should wear a UNIFORM. You've got to be kidding, I thought. I'd rather strip naked and run through the school halls than wear a scout uniform. I have a really strong memory of seeing Former President Gerald Ford in a commercial or a photo, wearing a scout uniform, and even at that tender age felt embarrassed.

I know it's a personal idiosyncrasy, but I'm just not that into a man in a uniform, except if he's a fireman. And a woman certainly should NOT wear a scout uniform: 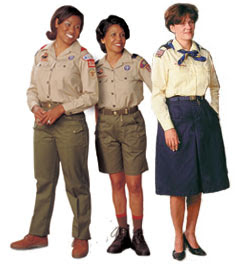 But back to me -- I told said Pack leader that I wouldn't be caught dead in a scouting uniform and if that was a requirement for the job, well, then, I'd have to resign. The man doesn't know me too well and didn't find much humor in my remark. But I got my way. I am the leader of the Wolf Den and I don't wear a uniform.

I mentioned a while back that I had a little spat with the other den leaders when I questioned putting together care packages for the troops in Iraq. (You can refresh your memory, here) Feeling overwhelmed with activities, I just didn't want to take it on. I changed my mind, though, simultaneously with the pack and den leaders' chastisement and decided that our little den would write letters to the troops at our next den meeting. I even made a trip to the Los Angeles Scout Store (and was helped by a very large woman dressed in full scout regalia)and bought patriotic and Wolf Cub stickers to decorate the letters.

And that brings us to today. There are eight little boys in my den and they are like a wild bunch of puppies. I literally have to scream at them to SIT! and COME HERE!. I explained to them that we were going to write letters of appreciation to the soldiers in Iraq. We talked about sacrifice and what it meant to fight in a war. Then they got busy and started writing and drawing. They did a great job: 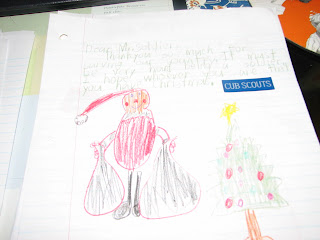 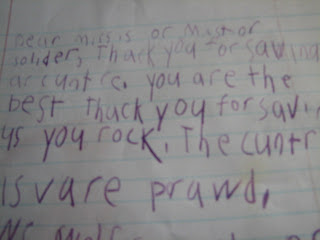 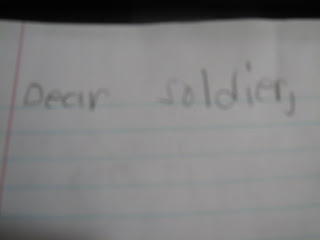 My older son, Henry, was there too and asked whether he could write a letter as well. While I helped the younger boys, he came up to me and whispered in my ear, "Why are those soldiers in Iraq again, Mom? I forgot why." "Ummm," I said. And I just couldn't answer him.
Posted by Elizabeth at 8:13 PM