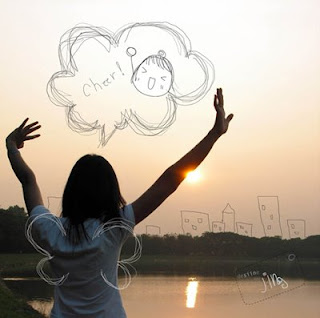 A good friend of mine told me a story tonight about Oprah and her boyfriend Steadman. I guess Oprah was waxing on something and at some point said, "I mean, I'm a nice person and..." and Steadmen evidently interrupted and said, "You know what? You are blank, blank, and blank [all good things and qualities to be proud of] but you're not nice." And Oprah had one of her "Aha!" moments and realized it was so.

I know several truly nice people, those who don't just do good deeds and are thoughtful and cheerful but who, rather, exude a goodness that is inherent. They're sweet. They might have good senses of humor or sharp wits; they might be sarcastic or reclusive or artistic or not, but they exude a goodness that seems inherent and unrelated to the other qualities.

I think I've always known about myself that I'm not nice, but it was only tonight that it was put into words. And it's sort of the base of an inner conflict that I've had for years as well. It's the one about trying to be good, to be perfect, to be pleasing and liked and, well, you know the rest. When those things aren't inherent, you can only strive to be them and most of the time I try and think I succeed but often I just plain don't. And that gets me to whether I used to be nice but have slowly but surely hardened over the years into not-so-nice, not-so-patient, etc.

And then I think if niceness is inherent and I used to be sweet, could I find that part of myself again? Or not, because it would be so entirely self-conscious. But all of that is just plain navel-gazing, right?

This past week, despite the almost euphoric heights of the Obama election, I was brought right smack into my not-niceness -- the several conflicted encounters on Facebook, the run-ins with the turbo-moms, a real spat with a close friend. I felt like I was on a runaway train, aware that I was gathering speed but scrambling to stop. My final blow was a quick reply to an email requesting yet another activity that I had to "volunteer" for -- this time engaging seven and eight year old Cub Scouts to write letters and gather what seemed to be millions of items for care packages for the troops in Iraq! I practically screamed a response when I got this request: NO MORE, NOT NOW, I JUST CAN'T DO IT. I'M SORRY FOR THE TROOPS BUT I JUST CAN'T DO IT.

You could have heard a pin drop in cyberland when I sent this email out to my fellow den leaders, all men. And then came their responses -- all about scouting and how wonderful it is for their boys and how wonderful the troops are, etc. etc. I, the sole woman, was a pariah -- unpatriotic, stingy, couldn't even muster up energy to instill good American values in the boys who had been entrusted to her. (And no one said that, but ever full of conflict between the nice and the not-so-nice, I imagined it).

Suffice it to say that I came to my senses and found my inner nice, and my little den of boys will be writing letters to the brave boys of Iraq next week. But you know what made me relent? My Swiss husband said, "I mean, those guys volunteered to be there, right? Why the hell do you have to send them care packages?" I made a sort of lame attempt to be patriotic and then dissolved into laughter at his not-niceness.

So, I'm searching for my old sweet self.
Posted by Elizabeth at 11:36 PM