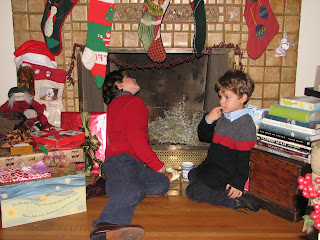 The other night, I asked the boys what they were going to put on their Christmas lists for Santa. Oliver said, "Santa is fake. You just get all the toys and put them out when we're sleeping." Henry looked really nervous and glanced at me.

I said, "Oliver, why do you say that? Do you not believe that there's a Santa Claus?"

He replied, "I don't know but you probably order it all from a catalog. I saw a lady wrapping presents and putting them under her tree on tv." Oliver's tone was really angry and defiant, put-out, really. I told him that some people didn't believe in Santa Claus but that I believed in magic -- I said this in a light tone of voice and Henry added, "Yeah, Oliver, Mommy and Daddy don't have enough money to buy all those toys that we get." (He's right about that but forgot about credit).

We went back and forth for a little while, though, and I got the distinct feeling that both of my boys just plain want to believe. Henry, I think, decided a year or so ago when he first had doubts that he was going to believe. I think he's capable of that -- knowing and not-knowing. Oliver, on the other hand, seems desperate to believe but equally desperate not to.

I know some of you think it's all nonsense, this Santa stuff, and that kids shouldn't be, well, deceived. I have friends that feel this way and I've largely been polite and accepting of that. But I'm in the camp that wants to prolong the magic and wish that my boys would believe in some form or another for the rest of their lives.

We left it at uncertainty, and the whole exchange sort of depressed me. When I told my good friend J about it, she said that when Christmas morning comes, it doesn't really matter whether they believe or not. They'll be caught up in all the excitement, no matter where it comes from. And I know she's right.

It's not just about Santa, though. It's about them growing up and out and beyond. And they were so little, once, so utterly mine.
Posted by Elizabeth at 4:05 PM