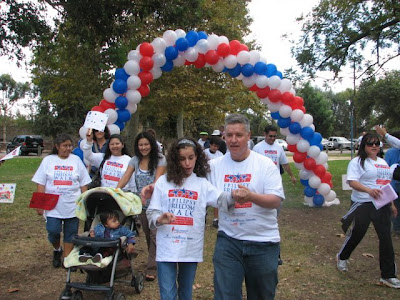 Today my dearest friends joined Michael, Sophie, Henry, Oliver and me at Griffith Park here in Los Angeles for an afternoon of walking, playing and just having fun. We raised money for the Epilepsy Foundation of Los Angeles -- and the goal was to increase awareness of seizure disorders and be free of them. A most worthy cause, of course. It's weird to be a part of these things -- I've been to many a non-profit fundraiser, and there's a certain exhilaration to having the party be for YOU (or a member of your family). The beauty of the day, a crisp, just after rain in Los Angeles kind of day, and the even greater beauty of the many children and adults who battle this terrible disease made me feel warm, connected despite our differences.

But it's hard not to HATE being there as well.

Despite the camaraderie, the joy of knowing that my friends stand behind me, it's a bummer to have to be there at all. There are a lot of children like Sophie, and a lot of children who appear worse off. There were several children walking around with the telltale scars of major brain surgery. And when I looked around at the other parents, the families and siblings of those affected by epilepsy, it was hard not to feel that we're all damaged. It's so damn tiring, this fight. 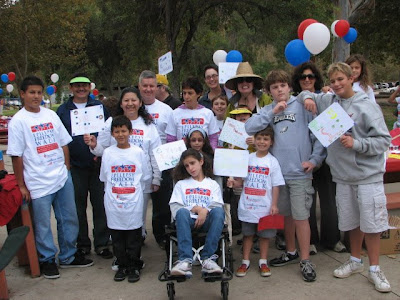 A beautiful woman who I recognized from last year's walk was with a very small group. They all held up signs with a photo of a little girl's face and the dates of her life and death. Her name was Lulu and I remembered her coloring last year at a table. She was nine years old when she died after a bout of status epilepticus last March and her mother was so brave to come. I can't imagine being able to do that.
Posted by Elizabeth at 8:49 PM