I still have nothing to say -- and everything to say, I suppose. But what I want to tell you is that today I had an appointment in Beverly Hills, and I hate going to Beverly Hills because with a few possible exceptions, it's a freak show over there. Crazy BMW drivers, mustard-colored Rolls-Royces, paparazzi on every corner, fifty year old women who are probably really eighty, slicked-back Porsche-driving metrosexuals -- well -- the list could go on and on and I just hate going there. But I had this appointment, so I drove my car into one of the large parking garages and as I climbed up the ramp in my car, a hot pink Beetle came down. On the side of the car was a large painting of one of those little Japanese dolls -- something like this, but just the head: 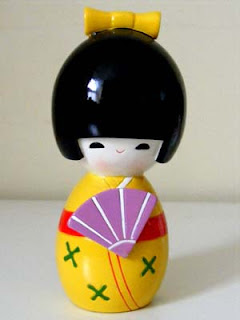