The Truth at Last** 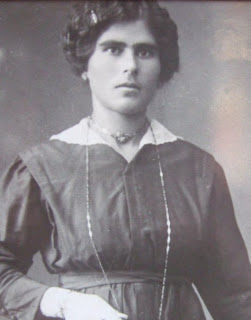 Grandma Josephine, my Nonni
Speaking from my own experience, I would argue that the best mothers are Italian-Americans, in part because they are warm and affectionate, but mostly because of the manicotti. When I was a kid, my own Irish-American mother was a terrible cook, so I would dutifully eat the remains of whatever luckless animal she'd just burned to a crisp, puke it up and then run down the street to Richie Giardinelli's house, where his mother was always baking ziti or cooking up a fresh pot of meatballs or making manicotti.
I never met anyone who was more beloved by her kids than Mrs. Giardinelli, though she wasn't much different from all the other Italian-American mothers I have known. Italian-American moms love their kids, they look out for their kids, they defend their kids, and because of that their kids generally grow up to be pillars of the community. If I had to do it all over again, I'd come back as an Italian-American kid—in part because of the warmth, the affection, the passion and the generosity, but mostly because of the manicotti.
-- Joe Queenan, from Why Italian Moms Are The Best
** This is no way denigrates my own mother's mothering. She was the best of mothers, but she was half Syrian and half Scotch-English. Despite that, she could cook very, very well!
Posted by Elizabeth at 7:03 PM