An Homage to Roseanne Roseannadanna 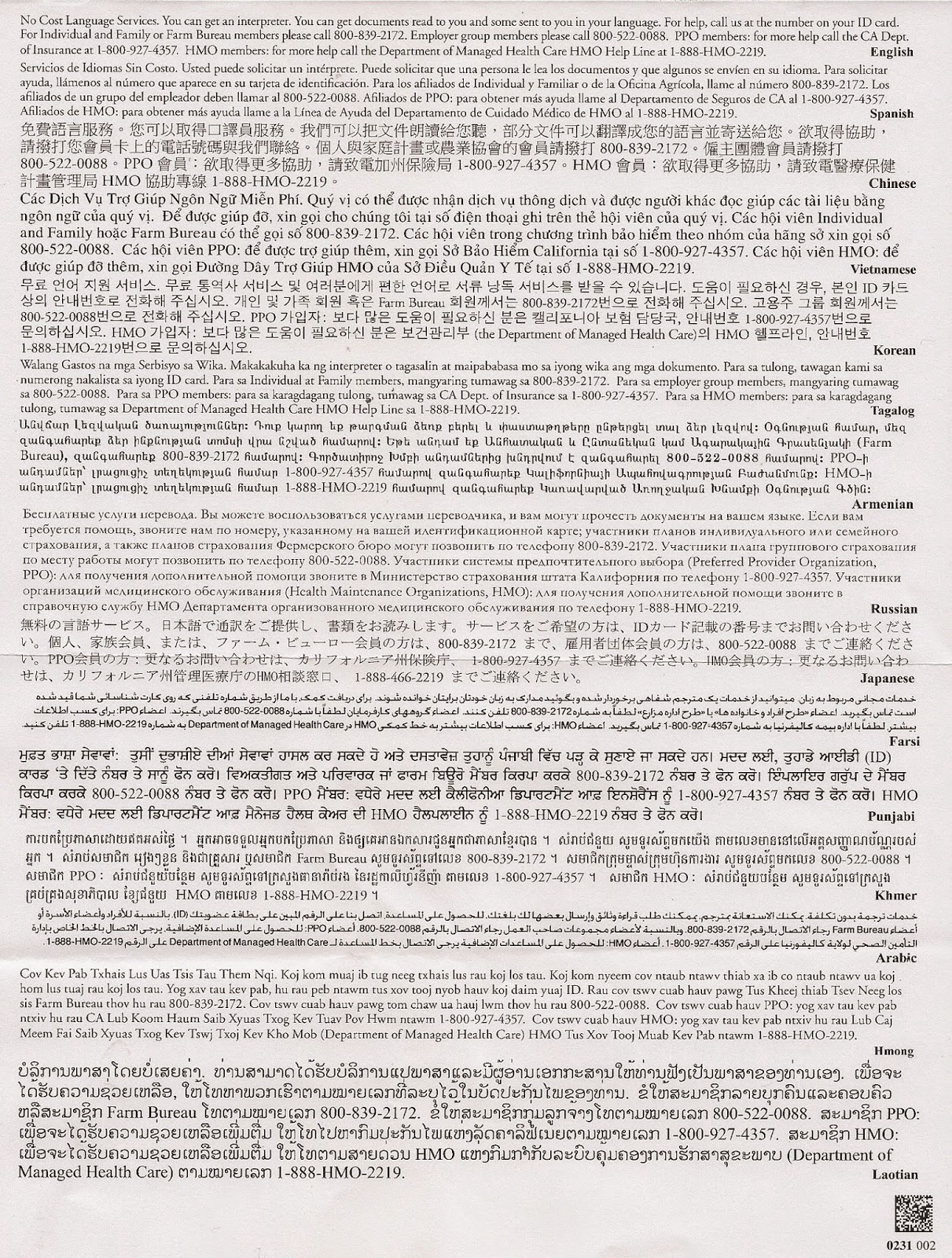 I have many copies of the above document, sent to me by either Healthnet, our private insurance company or Medi-Cal, our secondary insurance company. The other day, I think I mentioned that I got fourteen separate denials for the various components of Sophie's ordered wheelchair, each component getting its own denial which was two pages and then a third page letting me know that whatever information was in the first two was available in any one of the above languages.

And so on. Fourteen components.

Each three-page document had its very own envelope and stamp, of course, was pushed through the slot on my porch door by our mailman and lay scattered at my feet when I pushed the door open. As you can see, if I have difficulty reading the English language, the law of the land provides for me in Spanish, Chinese, Vietnamese, Korean, Tagalog, Armenian, Russian, Japanese, Farsi, Punjabi, Khmer, Arabic, Hmong and Laotian. I have no problem with the diversity of languages offered and actually believe it's one of the best and most extraordinary things about living in these United States and particularly Los Angeles which is arguably one of the most diverse cities in the world. I am decidedly not one of those people that freaks out over people not learning English well, something that seems to unsettle a certain type person no matter their political persuasion. I'm not naming names, but they're related to me in blood and marriage.  What I do object to is the use of paper and the cost of paper and the aggravating and stubborn inability of private and public behemoths to figure out a way to provide our explanation of benefits and denials and exciting news of  premium increases in our language of choice to begin with as opposed to every single damn time they send something. If I were a therapist, I might offer myself a gentle hand and nod and think this is clearly not about the excessive amounts of paper but perhaps more about the early trauma exacted on this woman so many years ago. But I'm not a therapist. I'm a writer and a mother and a human being exquisitely sensitive to the absurd. You know what? I got a notice yesterday from The Insurance Company, denying the amount charged for Henry's well child check-up and vaccine (yes, I know, he got his first vaccine and I don't think you heard a peep from me!) on the basis that there was not a proper diagnostic code on it. When I called and pointed out that there is indeed a diagnostic code for well child/preventive care, the Bartleby argued for a minute or so, I produced the copied document and pointed it out, and he said, why you're right, our mistake, and while I sighed, I also thought about my old friend at L'Espinasse, the uber-fancy restaurant where I started my culinary career in my other life, how he'd send someone into the walk-in for something that they inevitably couldn't find, so he'd exasperatedly go in there and pluck the item right from the shelf and yell in his Cajun voice, WHAT'S THIS? A PORK CHOP? I really wish I'd yelled that at the insurance company guy when he argued for a bit with me and then realized his mistake. Instead, I stripped naked, grabbed the bottle of vodka from the freezer and ran around the neighborhood to calm down. I still have to hunt down our neurologist to get her to provide yet another piece of paper attesting to Sophie's need for an EEG so that the insurance company can cover at least a bit more than it will right now. And if I told you that I push SEND for our gigantic ass premium even five minutes past the due date, I swear there's an envelope in the mail the next day stating my rights should I not honor the grace period offered to me, how my insurance will be cancelled and thanks for doing business with us -- followed by the notice in all the different languages known to Angelenos in the tenth month of the fourteenth year of the third millenium on Planet Earth.

As Roseanne Roseannadanna said, It just goes to show you, it's always something -- if it a'int one thing, it's another. Or better yet, I thought I was going to die!