Around whom I spin 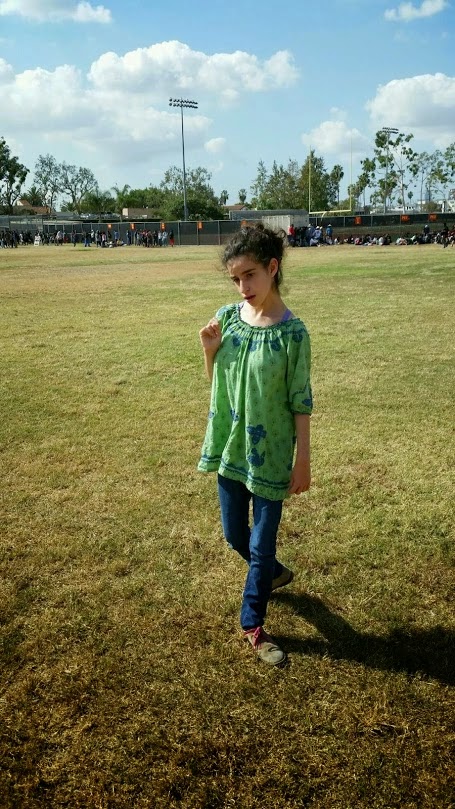 I've been worried about Sophie lately. Maybe the word lately is superfluous. I have worried about Sophie and worry about Sophie perhaps all the time, but lately I've been worried about Sophie. She has some strange behaviors that are subtly different than any she's had before. She rotates her right ankle a lot, almost collapses it onto its side. She contracts her right arm a lot, too, and flings out her right leg. She seems uncomfortable or maybe not. I don't really know what she's feeling. She has less seizures of course, because of the Charlotte's Web, but we're still waiting to get the higher ratio oil that really stops them. Until then, we've compromised and are not weaning any more Onfi. She goes on liquid fasts periodically now and just refuses to drink. I don't know what that's all about, so I basically force it into her -- take the little plastic thing that makes it a sippee cup out of the lid and tilt it into her mouth. She is very resistant to a lot of things and only seems happy and content when she's in her room, alone. She lies on her bed or sits cross-legged on the floor and fiddles with beads and baby toys. Don't tell me that this is what teenagers do, because it's not. I think, at best, that her brain is not so preoccupied with seizures so she's more aware of her surroundings, and the sensory input might be almost too much for her. She might be blocking it out, stilling the chaos. Again, I have no idea. When she arches her back and refuses to sit in a chair, I wonder if she's in pain or whether she's developing behavior problems. I hate this kind of worrying. I've said it before. It's the little things, sometimes, that do me in, make me crazy. If I ever do run away to Bora Bora, it won't be because of Sophie's epilepsy or the fact that she will never be normal. It will be something simple that breaks me, a link on my twenty year old tale that like a Christmas light on a string just goes out and brings down the whole strand.

Today, though, it was a little thing that made Bora Bora just another island in the South Pacific. Sophie's teacher sent me that photo, with this text:

Nice time for Sophie during the earthquake drill. Nice, soft turf and soil. She got to walk without physical support in the sunshine for a while. Of course I was right there. But I couldn't resist the urge to snap a happy picture of her in a rare moment of liberation.


Stuff like that makes me want to stick around. I am going to face it. She is the person around whom I spin.
Posted by Elizabeth at 5:47 PM