A Really Great Essay, especially for Claire and Ken and Single Dad 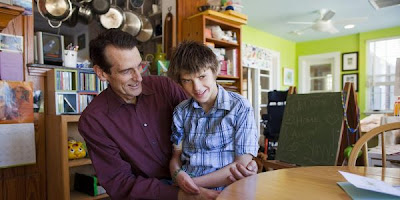 It's hard not to think of what's going on in America today -- the grappling with national healthcare, the politicization of what some (like me) might consider basic morality, the decimation of social programs for the disabled in the interest of individualism, the notion of what it means to be human.

Thanks to Sally over at Maggie World, I read this essay today, written by Chris Gabbard, the father of August. It's wonderful to hear these words from a male perspective -- please read and share.

And if you're sitting around, knitting or something, listen to any program on Krista Tippett's show Being, but particularly this one, Fragility and the Evolution of Our Humanity. Here's an excerpt, written by Xavier Le Pichon, geophysicist and spiritual thinker:

Thus, the most revealing character of human societies seems to me to be that they take care of those who, when considered on the sole basis of immediate efficiency, appear to be debris that should be eliminated. Taking care of fragile and vulnerable individuals has revealed to humans their own fragility and vulnerability. It has forced them to enter this dark world of fear in order to learn to live with it. They have realized that the human individual is a unique reality that keeps its unity under widely changing aspects from the fetus to the aged person at the end of his life. This process must have played a decisive role in the psychological mutation of humans and their acquisition of an artistic and metaphysical capacity. As a result, the social presence of an individual within a human society is related to the tight network of relations, of emotions and more deeply of love that has been progressively woven throughout his life, and not primarily to its immediate material usefulness.