While eating bonbons, contemplating political balance and comments by Alethia, 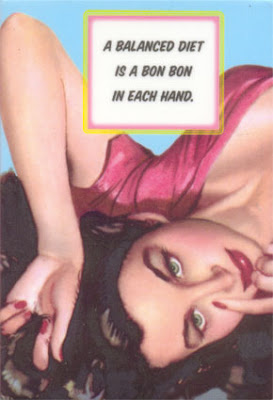 I thought I might respond to her latest comment on my blog. Contrary to what some might think about me, I do have a life outside of refractory epilepsy and all the doom and gloom that goes with that (and hope and despair and acceptance and anger and joy and grief), so today after attending my leadership seminar and reading Alethia's comment, I felt like writing a post that's completely different. Those of you more decorous than I, those of you who prefer to avoid conflict and those of you who just don't want to see the perhaps coarser side of me, might want to stop reading now. Otherwise, after spending more than five hours learning about children with cerebral palsy and how we might help them to receive proper healthcare, I'm in need of diversion so I'm going to give Alethia's comment its 15 minutes of fame on my little old blog.

Let's go (Alethia's words are italicized. Mine are written in PURPLE). You can also read Alethia's comment HERE.


Hi again -- sorry I was too busy working for a Republican majority in the house to visit your lovely site.


Alethia, even my own Republican and very conservative dear and much-loved mother never gloats and taught me never to do so as well.


So your answer to the hard facts in the movie is to suggest that our diverse nation be more like Finland?


Alethia, I was referring to the argument presented by Diane Ravitch in the article/review of the film that really shook up my initial perception of the film. In the article, Ravitch calls Guggenheim, the film-maker, on his referring to Finland as a bastion of education success without also recognizing that Finland is a socialist country with a strong teachers' union. Did you read the article? Have you seen the film? For that matter, did you even read my post? Because neither the article, the film nor I advocate that we "become like Finland."


OK - we first need to get rid of about $295,000,000 people, impose a state religion, and make sure the group is ethnically homogeneous and wallah a perfect system. Such intellectual absurdity. At least your heart is in the right place.


Alethia, there have been at least three occasions now on which you've called into question my intellectual rigor or lack thereof. With all due respect, I believe I'm about as smart as the average person and perhaps a tad smarter, due to a great education, the hard work, love and support of my parents and a fairly flexible mind given to me by grace. As for my heart -- well -- does it make you feel better to throw in a personal compliment with your personal insults? And by the way, the word wallah that you have used is not a word generally used. I believe you meant voila -- the French word for see there. According to online dictionaries, your "wallah" is, among other definitions, an Arabic expression used to make a promise or express great credibility on an expression. It is considered a sin among Muslim to use this phrase and follow it up with a lie.