Hearts in the air 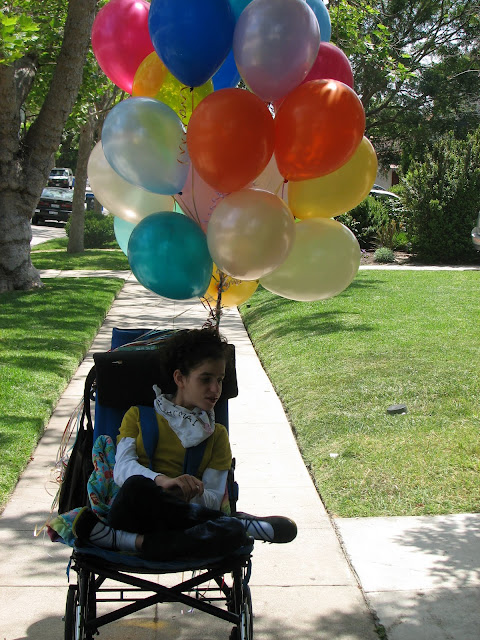 It must be in the air.

On Saturday, I told Mirtha, Sophie's Saturday caretaker (so that I can ferry the boys around to their sports games with a semblance of "normalcy") that I wished Sophie had some friends. I say it nearly every Saturday, think it every day. Robert Rummel-Hudson of Fighting Monsters with Rubber Swords wrote about his daughter Schuyler's yearning for friends today. It was titled Alone.  Louise Kinross of Bloom had a heart-breaking post on Huffington Post titled My Child's Dream: To Have Friends. Not a day goes by that I don't drop Sophie off at school and watch her go inside with her aide without feeling a catch in my throat and an ache somewhere deep. I don't know if Sophie yearns for friends, if she feels isolated or, at best, judges the special class, with "kids like her," as something less than ideal. I'm aware that I could perhaps be projecting this desire for her to have friends -- maybe I just want her to have friends, but she is happy unto herself.

I don't think it's as simple as a projection, though. I think my yearning -- and I'd venture to speak for many parents like myself -- for friendships for Sophie is just the tip of a greater heartache that Sophie is not, essentially, included in the world around her. Yes, she has a loving family with brothers who adore her and two parents devoted to her care and well-being. Yes, she has two amazing caretakers and an aide at school that are also devoted to her. She has friends in her classroom, several young women and men who have milder disabilities and who seem to really enjoy her company. But Sophie is going to be seventeen years old in less than a month. She has never been invited to a party or a dance or a get-together at another young person's house. She has no visitors, no play-dates, no social groups, no "typical" friends. Over the years, I have tried in various ways to increase her social life. I've had birthday parties and invited the children of my friends to come over to celebrate. Most barely acknowledge her. I walk with Sophie all over our neighborhood, but it's really only adults who stop and say hello. While my friends have always been supportive, I can't say that any of their children have expressed any interest in Sophie outside of inquiring about her general welfare.

I don't blame them, though. I wish it were otherwise, but I understand.

We live in a culture that separates the disabled from the able.  However well-meaning, nearly all social structures -- educational, health and physical/sports -- are not inclusive. Most private schools don't accept children with disabilities. In public schools, special classrooms further isolate interaction. Even my sons' charter school, incredibly inclusive of children of all races and socioeconomic status has no children with moderate to severe disabilities. There are no children with cognitive disabilities; I've never seen anyone who is blind or deaf or in a wheelchair. I've mentioned it to some people I know, and each has either laughed nervously (is she going to sue us?) or shaken their heads in sympathy, commenting on the expense. A very good friend of mine tells me about a special place in Chicago where people with disabilities both live and visit in various day programs -- a beautiful place, she says, I wish there was some place like that for Sophie. I don't tell her that I don't want Sophie squirreled away with people like her. When we were members of our local Catholic church, I spoke to two different priests about ways we might better include people with disabilities into parish life. I was met with indifference and, in one conversation, was told that my despair and heartache would be eased in the next life.


With the possible exception of the priest, I'm not angry about any of this. I'm just plain tired. I wish that I had the energy to make things different -- to figure out some way to provide for rich relationships between Sophie's peers and herself. I know, definitely, that Sophie's life would be enriched by friendships; I know, too, that Sophie's peers would be enriched by her.

Lisa Belkin of Huffpost posted a link to Louise Kinross' Huffington Post article. She introduced the link with this statement: A sad something that you -- or your child -- just might be able to do something about.

Those of us who've parented in this particular world for some time know that it's possible to hold certain kinds of sadness inside and still feel joy. I hold that sadness in my heart. I can love the world as it is in this moment and simultaneously wish or hope for something different. That's the trick, I think. Hearts in the air, heavy but floating.

Posted by Elizabeth at 1:41 PM