I'm a tiny bit in love with Wallace Shawn 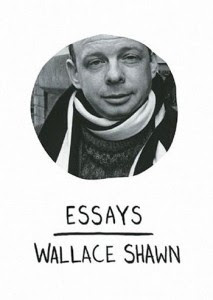 whom I saw and heard read last night at Royce Hall at UCLA. I indulge myself every year with a subscription to the Writers' Word series and because it's a single ticket, my "seats" are very fancy: in the third row, center. When I saw John Updike a few years ago, several months before he died, I could have literally jumped into his lap -- which I actually literally wanted to do. And tonight, I peered up and practically over the top of Wallace Shawn's perfectly round bald head. He was charming and clever and a bit self-deprecating and a bit stern and overall, a bit amorally moral. I think of myself, sometimes, as a bit amorally moral so I related to his views on what he describes as real world, fake world and dream world. Shawn describes the real world as a scary place -- mainly talking about America and the direction we're headed or have been headed (and he was particularly contemptuous of those in our country who advocate for and protect the extremely wealthy). He describes the fake world as the world we think we live in (a democracy) and the dream world as the world of art. When he talks, he doesn't sound judgmental as much as matter of fact and bemused, all at once. I wonder if it's called moral relativism -- a term I hear thrown around by the conservative right as something to be scorned. In any case, I absolutely agreed and felt a sort of release when I listened to him voice thoughts that those of us without a platform, who aren't filling giant concert halls to capacity are perhaps reticent to reveal. (Lately, the constant coverage of the Arizona shootings has made me feel uncomfortable and I think about all the killing of innocents and soldiers in the two wars we continue to fight and I wonder why we aren't in the streets pulling our hair out over this? lining the streets and weeping? )

Here's a passage from the first essay in his book titled The Quest for Superiority:
Beauty can be important in a person's life. And people beguiled by the beautiful are less dangerous to others than those obsessed by the thought of supremacy. If an afternoon of reading poetry has given me a feeling of profound well-being, I don't then need to go out into the street and seek satisfaction by strangling prostitutes. Art can be central in a person's life. If the art we create is beautiful enough, will people be so drawn to looking at it that they'll leave behind their quest for power? Beauty really is more enjoyable than power. A poem really is more enjoyable than an empire, because a poem doesn't hate you. The defense of privilege, the center of our lives for such a long time, is grim and exhausting. We're exhausted from holding on to things, exhausted from trying not to see those unobtrusive people we're kicking away, whose suffering is actually unbearable to us.
I bought a copy of Essays and read the one from which I took the quote above while waiting in a line that led to a table where Shawn sat smiling like a Cheshire Cat. I told him it was weird to stand in line for a signature but it must be weirder to actually sit and sign your name over and over. He looked up at me and smiled.  I'm a sucker for a signed book.
Posted by Elizabeth at 9:15 AM