I learned today that David Axelrod, President Obama's closest advisor and longtime political strategist is on his way back to Chicago, where he will be "cranking up" Obama's re-election campaign. I was always interested and excited that Axelrod was so close to the President, namely because he has a daughter with a severe seizure disorder and because his wife, Susan Axelrod, has been instrumental in raising awareness of epilepsy through her formidable non-profit foundation called CURE. I think that the last few years has brought much more publicity to the general cause, including several segments with the Axelrods on 60 Minutes and an entire issue of Newsweek Magazine in 2009. Among the many informative articles in that issue was one about the Axelrods' personal struggle with their daughter Lauren's seizure disorder. 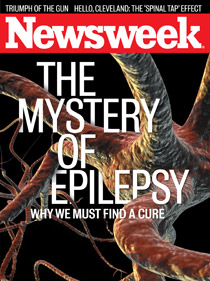 As I read the article in The Los Angeles Times newspaper today about Axelrod's tenure at the White House, I was struck by his answer to the reporter's question regarding healthcare reform:
Reporter: You played a big role in passing "Obamacare."
Axelrod: I came at the healthcare law from a very personal place, because I have a daughter with a chronic disease. I was a young reporter at the Tribune when she started seizing, when she was 7 months old. We were in an HMO. They didn't cover her drugs, which were running $8,000 to $10,000 a year. They were talking about brain surgery. I was making $45,000 a year. We almost went broke...The night that the bill [healthcare] passed, the president was in there with the staff watching the vote, and I slipped out and came in here and closed the door. I was overcome.
That statement obviously resonates with me on many levels -- both intellectually and emotionally. I am confused, overall, about healthcare reform, grateful that it passed, however flawed, but frustrated by its huge limitations and its cut-off reach. At this point, I'm not sure how one goes about making it better without resorting to resignation, disappointment, ranting and raving. The collision of those who believe in the efficacy of government with those who believe it to be intrusive and even evil pales in comparison to the collision between the rights and needs of individuals and those of big business. I lose hope, often, that we will ever be a society, a country that values our children over our "way of life" and the almighty dollar.
Posted by Elizabeth at 4:42 PM