The Lid is Back on the Can of Worms 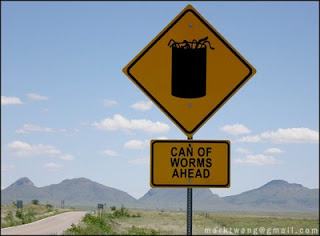 My regular readers know that I was forced to withdraw recently from a fellowship that I was awarded last summer by a division of Children's Hospital of Los Angeles and the University of Southern California because I refused to wear a surgical mask during the seminars in lieu of a flu vaccination. I never received any formal note from the powers that be (or were, for that matter, since they have no power over me, now). I attributed that, initially, to all the holidays that coincided with the hoopla, but made inquiries, again this week along with a cheery Happy New Year to the powers that were.

I got an email stating very succinctly that my initial email, where I explained why I found it difficult to wear a mask in seminars where conversation and dialogue are paramount, and where I asked whether or not there could be exceptions, was my OFFICIAL WITHDRAWAL.


And then I was told to send back my identification badge and bathroom key.


The ultimate irony is that the fellowship was for a LEADERSHIP training course.

Yikes. I can honestly say that I totally didn't see that can of worms.
Posted by Elizabeth at 12:27 PM