My boys attend a local charter school that has a constructivist philosophy and is very progressive. Next week, both the elementary and middle schools are participating in No Name Calling Week,  an annual week of educational creative activities designed to end name-calling of all kinds, with lessons and activities for all the students. The week was inspired by the young adult novel The Misfits and is "presented in collaboration with more than 50 national education and youth service organizations, including the National Association of Secondary School Principals, Big Brothers Big Sisters of America, the National School Boards Association and the National Education Association."

I was surprised when Oliver came home from school several weeks ago and told me that he might want to be a part of the week's activities and call attention to the word retarded that he said is used constantly on the playground and in conversation even by some of his friends. Of my two sons, I would say that Oliver has been the most self-conscious about having Sophie as a sister, particularly sensitive to the stares that she receives in public and often painfully conflicted and embarrassed. We have spoken for a very long time about all of these issues, and I've always encouraged him to be open about his feelings, even when they're difficult. He has told me before how much it bothers him when people use the word retarded; in fact, he once said in an angry outburst after Sophie had a big seizure that I have to deal with all of this at home and then go to school and hear people call other people retards.


Today, Oliver and a classmate did an amazingly brave presentation on two words whose indiscriminate use  bother them deeply and personally. I crouched in the middle of the play-yard where hundreds of kids sat in rapt silence and watched as these two nine-year olds stood up for what they believed in and educated all of us. Both Oliver and his classmate introduced themselves and told the group who they were. Then they each discussed the name-calling that they had been hurt by. Elizabeth spoke about her gay parents and Oliver spoke about Sophie.

I was humbled and awed (and extremely teary). 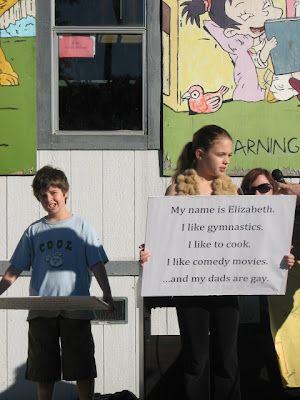 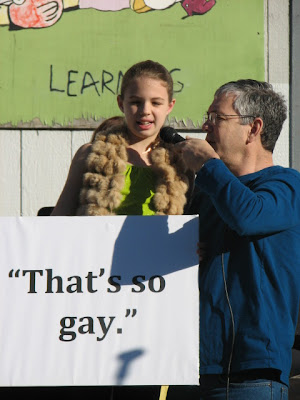 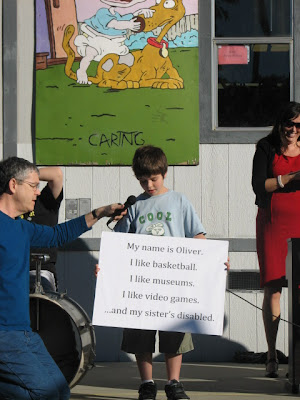 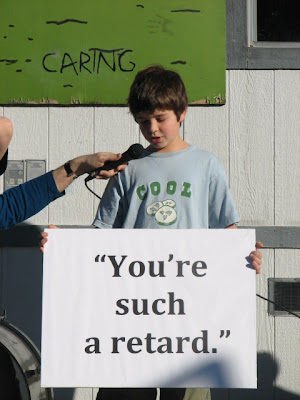 Posted by Elizabeth at 5:16 PM