Dispatch from the School of Tradition 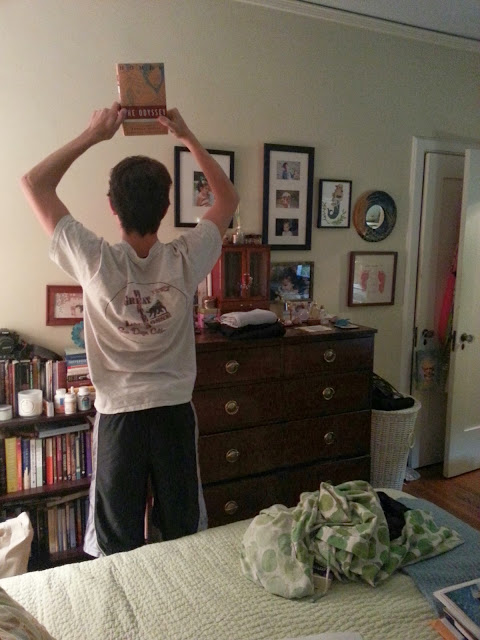 Few sons attain the praise Of their great sires and most their sires disgrace.
from Homer's The Odyssey

I know you don't hear much about Henry, and that's because he's moving through the world sort of effortlessly. He's been my sunshine boy since the moment he was pulled from me, a giant ten pound baby boy with hands and feet like a puppy's, and a big round head. He's now almost 5'11" and skinny as a rail with those sinewy arms that seem to appear out of nowhere, a dream of a young man in every way. This year he's going to a very traditional Catholic high school and is, of course, completely happy there. Despite my various lectures about the dangers of conformity, my anti-Catholic stance on a woman's right to make decisions regarding her body, including whether or not to have an abortion, and -- much to Henry's horror -- my stance on feminism, stated to a car-ful of teenagers in my carpool from school (what can I say? I had a captive audience!), Henry is perfectly happy putting on his uniform every morning, sitting through a 7:50 am Rev of Jesus class and listening respectfully as athletes pray before games. I am certain that were I to drop him in east Los Angeles, he'd be equally as adaptive, a kid to whom others flock and who, at worst, is called perhaps a little too chatty, by his teachers. Henry looks exactly like my father who is one of the most good-looking and glamorous men on the planet, even now at age 77, and he somewhat takes after me as a voracious and fast reader. This year he is in Honors English and subject to, most recently, Homer's Odyssey, a book that nerdy old me was so excited for him to read (the wine dark sea! the wine dark sea!) but which he read in agony and finally finished tonight. He told me that he was tempted to burn it, he hated it so much, but I convinced him to stand there and hold it up in victory.

This will probably be the only dispatch from the School of Tradition for quite some time as it's generally conflict that breeds story, and we all rest easy with the Henrys of the world.

Posted by Elizabeth at 9:00 AM