If you squint, don't I sort of, kind of, look like Gertrude? I even have a poodle! My Alice B. Toklas is Mirtha (just the cooking part), and I'm getting ready to have another group over to discuss Monique Truong's novel The Book of Salt. Because the book is about a Vietnamese chef who works for the legendary couple, our menu is both French and Vietnamese. We'll start with Pate and Gherkins and French cheese and crackers while sipping on a French rose. Dinner is a Vietnamese Noodle Salad with Shrimp, Beef or Vegetable Pho and Tofu Bahn Mi. For dessert I've shined up my rusty French pastry skills (another life) and made a Vacherin with Berries and some Ginger Black Peppercorn French Ice Cream. I won't divulge what happened to my first meringue.  Did it burn in our ancient oven that predates Gertrude herself? I'll never tell. I told you that I'm rusty, a far cry from this gal who cooked in a four-star New York City restaurant back in the day under one of those maniacal pastry chefs you read about and an equally maniacal French-Swiss-Hong Kong chef who yelled so much, his white face turned pink and his tall chef's hat nearly blew off with the steam from it. Never at me, though. Never. 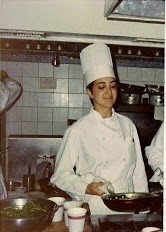 The ice-cream base nearly boiled over, too, but I saved it in the nick of time, and it's now sitting in an ice bath, slices of ginger and tiny multi-colored peppercorns steeping away. Oh, la, la.

Wish you were here.
Posted by Elizabeth at 3:08 PM