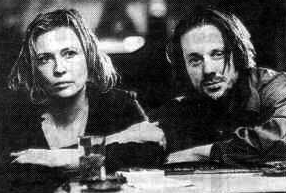 I took the kids over to the Farmers' Market tonight to meet a whole bunch of friends and celebrate E's birthday. We sat around tables that we pulled together, drank wheat beer with orange slices and ate food from one of the best Mexican spots around. We laughed a lot and tried to manage the kids who were all running around and into and out of the market stalls. Oh, well...

I brought Sophie along tonight as well and she did pretty well in her stroller despite the noise and mayhem. She only had one small seizure that I missed when I got up to get Oliver some food. By the end of the second hour, though, she was growing increasingly agitated and I knew it was time to leave. It's hard to sit for that long in that crowded of a space. The bar next to us was growing rowdier by the second as the people crowded round a television showing the Lakers game. I had to push through the crowd to ask the bartender to validate my parking ticket, and when I did, a guy sitting on the barstool said,

Why don't you sit down and have a drink with me?

Because I was sort of pushed up against him, I felt his almost square body and was on eye level with a few gold chains hanging around his neck. He had beady little eyes in a red face and wore a straw cowboy hat.

His invitation struck me as hilarious, though, and I nodded over to my "crew": a handicapped child in a wheelchair, a small boy with chocolate smeared around his mouth and a big boy with sweaty hair and dirty jeans.

Trust me, I said, with a smile, You don't want to have a drink with me.
Posted by Elizabeth at 9:16 PM