Ask and Ye Shall Receive 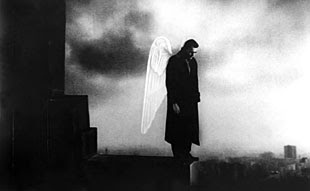 an image from one of my favorite movies: Wim Wender's Wings of Desire

I had a conversation with Sophie's homeopath this evening. This is a man I love. Truly love. And not just because he's helped Sophie beyond measure. I love this man because his voice is gentle and he listens quietly. When I ask him a question, he answers the question. He is not emotional but there's something taut about him, willing, and open. I called him this afternoon because I'm worried, again, about Sophie. She's slumping, coming off the benefits we had seen from the remedy change we'd gotten in Arizona. She's begun to have big seizures again, weekly or even twice weekly. Her mornings are agonizing, anchored by a bout of spasms that sometimes go on for more than half an hour. She looks drawn and tired to me and I feel like she is depressed. When the Homeopath suggested another dosage, I started to cry. I whimpered, actually, pleading with him that I didn't have any hope. I might have even said something about how I think, sometimes, that it's all my fault. Before you rush to defend, imagine what it's like to feel despair when you know you must hope, to not have faith that things will get better when you know that having faith, too, is the only way to live. I wonder sometimes where I end and Sophie begins or where Sophie begins and I end. I get confused, wondering whether my own anxieties, even depression, are somehow hers as well. I waver from an instinctual feeling that this has nothing to do with you and you must help HER to this is her journey, her path and you have little control.


So, I'm crying a bit and feeling quite desperate and The Homeopath speaks quietly to me in his dulcet tone and I feel a little better. He doesn't say anything in particular but he laughs gently when I try to make a joke and it feels a bit better. He gives me the plan, which is to change the dosage of the remedy, and then I hang up. I had been watering the plants outside when I was talking to him, so I turned off the water and went back inside.

The phone rang again, and I yelled at Oliver to answer it. It was The Homeopath, again. When he talks, sometimes, there is a smile in his voice. He said, "You're not going to believe what just happened. The Doctor was in the building and is in my office right now."

What doctor? The Great Homeopath from Arizona, the one that we had visited last May (you can read about that HERE). And he happened to be just visiting today and had walked into our doctor's office right then. Evidently, the two had had a short conversation and decided that we should try a different dosage of the remedy for Sophie.

I know this all sounds crazy, but what are the chances?