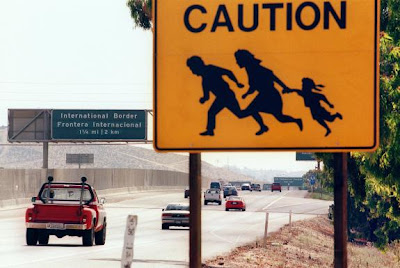 Sophie's Saturday companion Mirtha is an amazing woman. She is short and curvy with long, black ringlety hair. She has helped me with Sophie for over five years. She is, in some respects, Sophie's best friend. She is in her mid-thirties and the mother to a fourteen year old boy and a four year old boy. While they are not married, she has lived for many years with the father of the four year old, and they work at four jobs between the two of them. Her "husband," let's call him George, has lived in the United States for seven years but is an illegal immigrant from Guatemala. Mirtha works and lives legally here but does not have a green card. She lost thousands of dollars a while back to an unscrupulous lawyer who was helping her to get a green card.

George left his job washing cars two weeks ago and was driving home to his family when he was randomly pulled by the Los Angeles Police. When the policeman asked for his license, George didn't have one, so the policeman walked back to his car and called Immigration. George was then taken to the local jail and waited a couple of days before being transported to immigration's jail. Mirtha told all of this to me last Saturday, four days after it had happened. She cried a bit but said that everyone in her church was going to try to raise money to get George a lawyer. She told me that it would probably cost between $5000-$7000. She told me that her older son was very upset about losing George, his stepfather, and couldn't stop crying. She told me that her little boy kept asking where Daddy was and when was he coming home?

I didn't know what to say. I have no money to give to her and words seemed a paltry consolation. I told her that she should bring her boys with her when she worked on Saturdays with Sophie, and she seemed grateful for that. She came this morning with her little boy who is much loved by my two big boys. I asked her how George was doing and she told me that he has been moved to immigration in Houston. He will be flown to Guatemala on Monday morning in the tee-shirt, shorts and sneakers that he was wearing the afternoon he left his job at the car wash and headed home to be with his family. He was not allowed to see his family or to take anything that he might own here back to Guatemala.

Mirtha is alone, now, a single mother with two American sons. She must work her two jobs and do without the money that her husband brought in from his two jobs. She will move out of her two bedroom apartment into something smaller that she can afford. She will hopefully find some help with her little boy so that she can continue to work to support her sons. The older boy is angry, now, unable to understand how this could happen. The little boy thinks his father has gone away to work.

George will arrive in Guatemala and begin to look for work so that he can raise the money to pay someone to get him to the United States again. He wants to be with and take care of his family. He does not want his boys to grow up without a man in the house, and he loves his wife.

Posted by Elizabeth at 5:33 PM