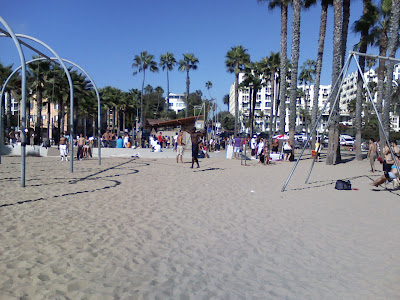 you've got to click and make this bigger to really see it!

I took the boys and Sophie to Santa Monica yesterday late in the afternoon. Frankly, summer is gasping, and so am I. We didn't want to do the whole drag everything down to the beach since it was incredibly crowded with Labor Day people, so we decided to rent bicycles and ride toward the Santa Monica Pier. I had brought Sophie's stroller and figured I could just stroll her while the boys rode, but then I decided to cart Sophie along behind me in one of those carts meant for two toddlers. Sophie is fourteen and of average height, but she's very light and likes to sit with her legs crossed, so she seemed comfortable and I was thrilled at the prospect of some exercise. The sun was sparkling in that late summer way on the ocean, sailboats were twinkling by and everything was rosy. The bike path was mobbed with cyclists, but the boys were doing well and we just kept riding. We passed families barbecuing, people playing volleyball, surfers changing out of wet suits and flashing their skin, homeless people rooting through trashcans and a whole beach of exercise hoops and rings and a tightrope walker who had the blackest skin and the biggest, rippling muscles the boys had ever seen (click on the photo above and see him up close!). It was there, at the outdoor "gym," that we stopped and watched for a while, marveling at all the athletic prowess. And it was there that Sophie started having one of her long clusters of seizures, the kind where her arms and legs thrust out. Where she bucks like a wild horse and groans. This went on for probably twenty minutes, during which I did what I always do: crouch over her,  it's all right it's all right and try to keep her from banging her elbows and feet. I was sweating in the sun and I suddenly lost my temper, but only INSIDE MY HEAD. Meaning, I thought I wish I could kill myself right now. I wish  we were dead. If you're worried, don't be. This feeling doesn't come often and I imagine that many of us who do this job over and over day in and day out for years and years have it. The beauty of this blog is that I have a space, a place to write it. It doesn't feel like a secret and wear me out.
Thank you for listening.
My last hurrah is actually for the summer.

And this is for you, courtesy of Albert Einstein:

Strange is our situation here upon earth. Each of us comes for a short visit, not knowing why, yet sometimes seeming to a divine purpose. From the standpoint of daily life, however, there is one thing we do know: That we are here for the sake of others...for the countless unknown souls with whose fate we are connected by a bond of sympathy. Many times a day, I realize how much my outer and inner life is built upon the labors of people, both living and dead, and how earnestly I must exert myself in order to give in return as much as I have received.

Albert Einstein
Posted by Elizabeth at 12:05 AM