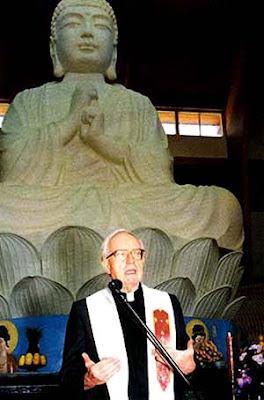 Generally speaking, it is better to keep one's own tradition. It is more suitable. But among some people—in the West they are usually Christians, Jews, and to some extent, Muslims—there is an interest in Buddhism. Sometimes, because of their individual mental dispositions, they do not find much in their own tradition that is effective, but they still want a spiritual practice. They feel a strong pull toward Buddhism, and then, of course, it is their right to follow Buddhism. After all, all religions belong to humanity. What's important is that once we make a decision to follow another religion, we must keep in our minds that we must avoid criticizing our own previous tradition. We must show respect for it.

–The 14th Dalai Lama, from "Ethics for a Secular Millennium: An Interview with the Dalai Lama,"Tricycle, Fall 2001

Posted by Elizabeth at 1:05 PM