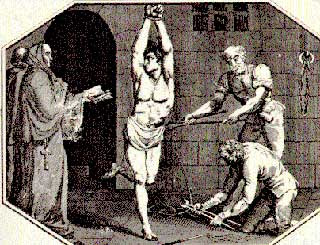 Not too long ago, before the Healthcare Wars there was a brief moment when it was The Torture Wars. And somehow, in all the recent hoopla and bullshit, that dark beast has shuffled or been pushed back to the dark recesses from whence it came. Or so I thought. Tonight, I sat on the American Airlines flight from St. Louis with my Kindle and read Andrew Sullivan's  respectful "Dear President Bush" letter, an essay of such enormous import I wanted to stand up and tell everyone on the plane, buried in their Dan Browns and James Pattersons and Sudokus to read it, read it. You must read it.

You must read it. Go buy the Atlantic Magazine and read this letter and then tell everyone you know to read it. Or read it now by clicking HERE. Challenge the people you know who believe that torture is justified when a nuclear bomb threat is hanging over the heads of the free citizens of the United States to read it. Tell those who would wish that whole dirty, ugly episode relegated to history or buried. Tell those who believe that our already fractured citizenry would never benefit from some kind of formal reckoning of this stain on our country.

I got in many an argument over torture -- over Abu Ghraib, over Guantanamo, over the amazingly craven Dick Cheney who continues, to this day, to defend some of the grossest crimes against the Constitution of the United States, against the values of all civilized nations and religions, against humanity.  Who, me? Argue about something? Come on! I argued on some blogs, I argued with my brother-in-law; I argued with my mother and my father. I admit to personally refusing to watch that tv show 24, even when some of my closest friends told me that they were hooked.

Andrew Sullivan spells it out in remarkable prose and provides one of the most amazing refutations of torture that I've ever read. And he demands that our former President own up to what has happened, even if it means further weakening the divisions in our country. Some might wonder at the hubris of a single man, a journalist, a blogger and writer, having the presumption to make these powerful demands that not even President Obama has made. I don't think it's hubris. I think it's testament to the highest ideals of  our country -- that one man, one, simple man graced with the gift of language can make an amazing appeal to his former leader, the person whom he supported and invested trust.

Go read it. Click HERE.
Posted by Elizabeth at 9:08 PM