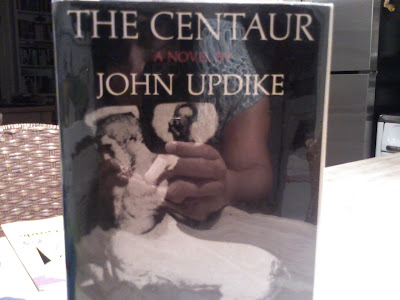 I'm finishing up John Updike's self-professed "favorite book I've written" The Centaur. It's weird, weird, weird and very wonderful. I bought a second edition for $22.00 at a fabulous bookstore in Venice (that's Beach, not Italy), so it has that crinkly cover and smells good. I've come to John Updike and fallen in love late in life, I think, for someone who considers herself pretty damn well-read. The novels of Updike that I've read are so of their time, of the social mores of the forties through the seventies, and the awful banality of work and marriage, the onset of corporate culture and concomitant loss of identity. Some would say they're misogynistic in tone and the women aren't completely fleshed out, but I'm seduced by the language, the old-fashioned style of it, the craft and industry that appears effortless. There's a hardness to the male intellect in these books that I'm drawn to right now in my life -- but...
when I'm finished I'm dashing out to Chevalier's (see my sidebar for the link) to pick up a copy of Lorrie Moore's new novel, the first in eleven years! I came to Lorrie Moore when I lived in New York City and read her short story "People Like That Are the Only People Here: Canonical Babbling in Peed Onk" in The New Yorker. Sophie had already been diagnosed when I read it, a story of a small boy who has cancer and the wry, devastated voice of his mother telling it, and I was so taken by it that I ripped it out of the magazine and carried it around with me for years. It became a touchstone of sorts, something that I referred to over and over as I navigated our own treacherous journey. It sits, now, in a folder in my file cabinet, dog-eared and thin, the file marked "Important Articles." The short story went on to win an O.Henry prize, I believe, and then appeared in Moore's last published book Birds of America. The new novel is something I can happily (albeit nerdily) say that I've anticipated for a long time!
All this....just because. It's not ALL FIRES, ALL HELLFIRE and ALL GO TO HELL around here ALL THE TIME!
Posted by Elizabeth at 7:54 PM