If there must be trouble, let it be in my day -- Thomas Paine 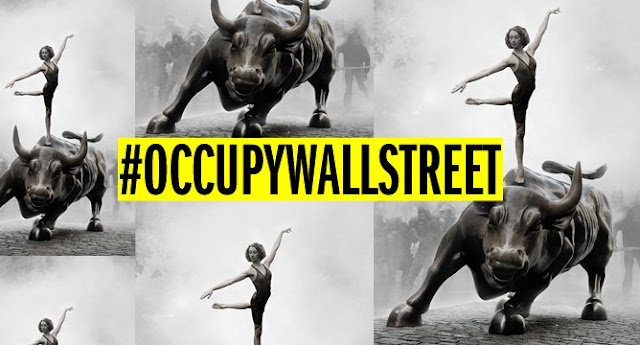 Yes, I've been reading, albeit cursorily, about the folks "occupying Wall Street," and I have a neighbor friend who's actually participated in some of the rallies here in Los Angeles. Everyone who reads this blog knows where my political persuasions lie, but lately I've kept my head in the sand, deeply depressed, to tell you the truth, more convinced than ever that we're living in a plutocracy, or perhaps an oligarchy but certainly NOT a democracy. My family is struggling mightily -- and I have to say that while the stress and grief and loss that accompany being the parents of a child with severe disabilities takes its toll, behind that stress and grief and loss is overwhelming love, love that makes it all bearable, all the time.

Behind financial and economic stress is literally nothing, a black hole, a gaping maw, a terrifying void.

I'm moved by the photos of We Are the 99 Percent that you can see here.  There's this one: 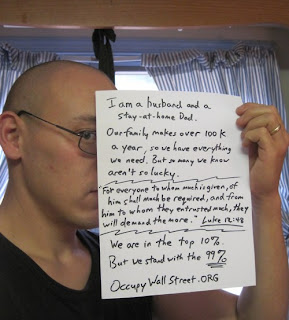 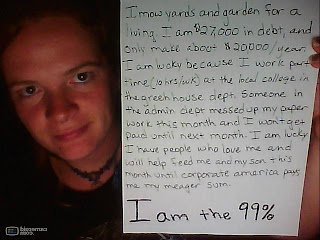 and I'm educated by Hendrik Hertzberg's article about the movement in The New Yorker.

The process, not the platform, is the point. Anyway, OWES is not the Brookings Institution. But its implicit grievances are plain enough: the mass pain of mass unemployment, underemployment, and economic insecurity; the corrupting, pervasive political influence of big money; the outrageous, rapidly growing inequality of wealth and income; the impunity of the financial-industry scammers whose greed and fraud precipitated the worst economic crisis since the Great Depression; a broken political system hobbled by a Republican right willing and usually able to block any measures, however timid and partial, that might relieve the suffering.


From the introduction to We are the 99 Percent:


The American Dream is not to become rich. It is to see the fruit of your labors, whatever they may be. It is to EARN your rewards. But Corporate America has taken the rewards away. All that is left is work and desperation. (Or no work, and even more desperation) A home, health insurance, providing for your children, giving them a future…those things SHOULD be attainable.  But unions are gone or ineffective. Politicians are corrupt. The Supreme Court values the speech of corporations over those of the people.  Jobs are taken overseas.
“These are the times that try men’s souls.” Thomas Paine said that.  He also said, “If there must be trouble, let it be in my day, that my child may have peace.”

And there's this astonishing article.


There's something very different going on here -- it's not scary to me as much as inevitable. Dare I say exciting? Hopeful? Possible?