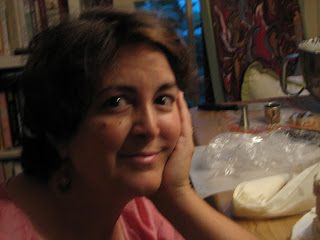 Yesterday, as I was driving around, driving around, driving around, I heard the story on NPR, on NPR, on NPR of the one Israeli soldier, held captive for five years, five years, five years who was released in return for one thousand, one thousand, one thousand Palestinian prisoners. Gilad Shalit was the Israeli's name, name, name, but there was no name, no name, no name for the thousand Palestinians, Palestinians, Palestinians. I thought about, thought about, thought about this as I drove around, drove around, drove around, wondering what the cost of an Israeli soldier, Israeli soldier, Israeli soldier was in comparison to a Palestinian, a Palestinian, a Palestinian and there was no sense, no sense, no sense to it. And then an expert spoke of drones, of drones, of drones, of how expensive they are and how many people, how many people, how many people they kill, they kill, they kill and how many countries and what countries develop them, develop them, develop them. And I thought it's madness, it's madness, it's madness.


Where I'm going is here.