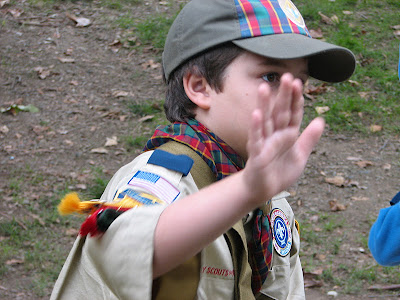 It's a beautiful day in southern California, albeit a bit on the scary-dry side and we're headed east and north to a baseball game in the deep, dark valley. I've got on a tee-shirt and jeans and will bring along an umbrella to shield my lily-white skin from the wicked rays of autumn. I opened the newspaper this morning casually, like I said yesterday I generally only scan the headlines and then politely fold it back up and place it on a stool for The Husband to peruse when he comes home from the Mistress -- but this morning's headlines screamed, atrociously, to me BOY SCOUTS FAILED TO REPORT ABUSER so I placed my coffee cup down and unfolded the paper and my heart quickened and my stomach sickened. It would seem that back in the dark days of the seventies and eighties, many boys were abused sexually by Boy Scout leaders and the organization didn't report these known incidences to the police but removed them from their positions with kind letters, assuring them, the pedophiles, that their positions in the community would not be ruined or embarrassed or whatever else. The said pedophile then skipped off to Canada and proceeded to do exactly the same thing and the Canadian scouts overlooked it as well.

Whether this is going to mimic the Catholic Church pedophile scandals remains to be seen, but as the mother of a Cub Scout, I'm sick about it.

Reader, what would you do?
Posted by Elizabeth at 3:00 PM