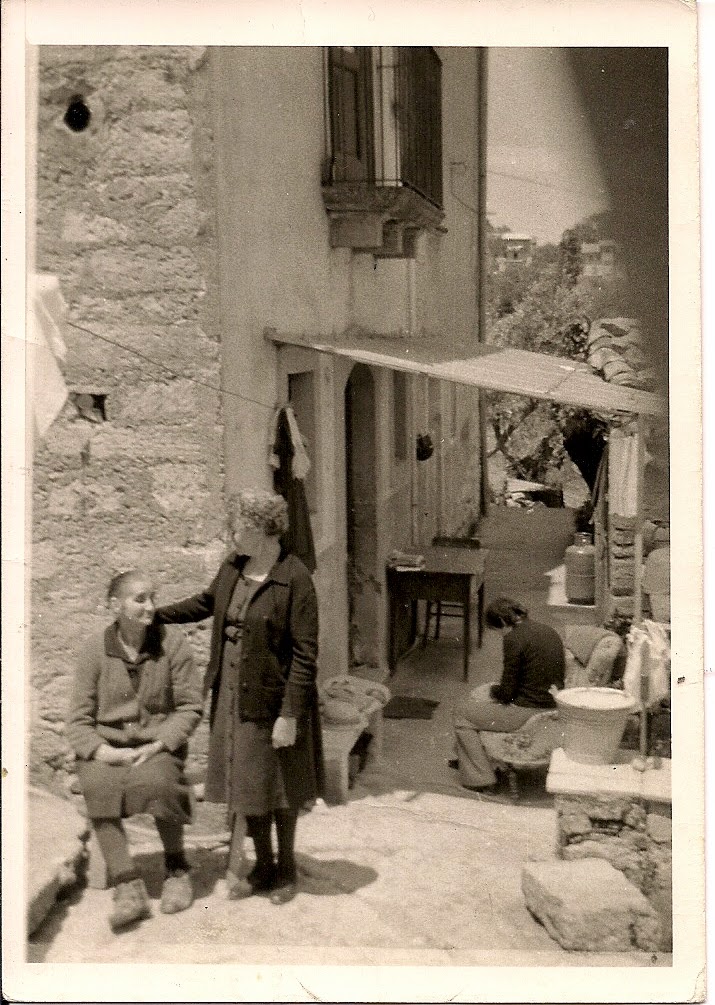 The woman in the black cardigan is my Italian grandmother, and she's standing next to her sister outside of their ramshackle house in the small town of Cosenza in the Calabrian region of southern Italy. I imagine it's nearly 100 degrees outside despite the heavy clothing, but they're all protected from drafts, the kind of wind that grabs the neck and kills you if you're not careful. I have lately begun baring my arms after a period of many years. My attitude is a sort of screw it, I'm fifty years old and who the hell cares if they look like my Italian grandmother's? Covered or uncovered, my grandmother was a very strong person physically, if not mentally. Legend has it that she carried bags and bags of groceries for many blocks in New York City and then up many flights of stairs unassisted. I, too, have pretty decent upper arm strength which has come in handy with the disabled child, but my arms are just not cut in that sinewy way that comes from exercise or genetics. They look soft, and they are soft and their strength is buried deep, like the plastic king in the middle of the dough of a King Cake. How's that for metaphor? This summer I was inspired by a friend of mine at Expressing Motherhood who made an amusing video about baring one's arms, and for three days in a row I've worn three different outfits and bared my arms and am now crafting a post about the act.

That leads me to something a bit more substantial -- or should I say as substantial as my bared arms?

Last night, Cheryl Strayed, the mega author of Wild, posted an interesting article by Katie Roiphe on Facebook. Listen, I'm not really friends with Cheryl Strayed, I just "liked" her Facebook page, and every now and then I'll "like" what she posts along with tens of thousands of others. Roiphe's article was about the very hot (both literally and figuratively) Karl Ove Knausgaard's new series of memoirs that are slowly being translated into English. Her article basically proposes the question "what if a woman wrote it?" Knausgaard's memoir evidently outlines in minute detail his every personal struggle, including the minutia of his daily life as father. He talks about diapering his babies, I think (I haven't read it), along with philosophy and whatever else is going on in his life and mind. The books are a huge sensation. I want to read them, frankly. But, yes, what if a woman wrote it? Roiphe makes an amusing case that a Karla Ove Knausgaard would probably receive a far different response than her male counterpart were she to publish the same, and much of that negative response would come from women.

Generally, I'm beyond bored by things like the mommy wars and the work vs. nonwork stuff. I think the extreme parenting I've done has given me a sort of trump card that I admit to periodically over-using, but this article by Roiphe really struck me, particularly in the context of my own recently published ebook. Now, I'm not comparing myself to these fancy pants writers. I have a $2.99 ebook that is about 36 pages and covers roughly one and a half years of my life. I've gotten a great response to the book from people of all persuasions, and I've also gotten some criticism that I believe was considerate and worth absorbing. However, one person made the comment that she (a woman!) didn't see it as a book, really, for a literary community but rather as a "passionate article for a mother's community." I've been thinking about this statement for days, actually -- not in any obsessive, upset way but more in a curious, cud-chewing way. There's a tiny ding in that statement, a criticism not so much of my writing's literary quality (which is always arguable) but rather in the suggestion, however faint, that a mother's community holds nothing literary.

Like I said, I'm chewing on this quite placidly. With bare arms.
Posted by Elizabeth at 10:40 AM