This being published thing is an odd bag. Is that the right expression? My mini-memoir, Hope for a Sea Change has been "out" for a few weeks, now, and thanks to all of ya'll, it's sold pretty briskly on both Shebooks and Amazon. I have hopes to get a "real" book -- the whole shebang from which the ebook was only an excerpt -- published one day as well. That's the pipe dream, the life dream. My pondering today is the marketing aspect of publishing, the whoring, really, one must do to "sell" your book. I have a lot of writer friends and several writing mentors. I naturally appealed to them, first, when I knew my ebook was coming out because I trusted that they would reach out to their own networks and help me to spread the word. Many of them have gone through this process, and I worked pretty tirelessly to promote their own writing when they themselves had essays and books published. I did this not only because it seems to me to be a sort of writer etiquette but also because I genuinely believed in their writing and wanted to promote it. While I didn't do this because, I assumed that this would be reciprocated,  -- or should I say presumed? What's happened is that a few of these writing friends and mentors have, for whatever reason, done nothing to help me promote the book. I find this weird and a little upsetting, but not really upsetting -- I mean, really, in the scheme of things given my life? Maybe they don't have the time. Maybe they hated the ebook and can't bring themselves to promote it. Maybe they're against Amazon and ebooks in general. The professional world of writing is intimidating to me -- the whole MFA thing, the workshops, the expensive colonies and prizes, the Facebook pages, the pandering and the cliques. Oh, the cliques. I see people I know, who I think of as real friends, not just social media friends, glamming and glomming onto the lionized, the powers that be in the literary world. I feel a little envious, I guess, a little aspirational, a little hurt. If I type it, will the defensiveness be purged? I feel much as I did in the eighth grade when I'd walk out of a bathroom stall at school and see The Susans or The Dianes tittering at a sink mirror, swiping blue eye-shadow over their eyelids, sticky flavored gloss over their lips. Their eyes might have shifted over to me and then away. I didn't have it in me to wear blue eye-shadow under the rose-tinted goggles I wore that year, and look at me, now, nearly forty years later, slipping out the door before they can see me.

The Buddhists talk about craving, about desire, about the source of suffering being aspiration and clinging. I get that and must remind myself of it,over and over. Good Lord, ya'll -- here's what I most wanted when I was ten years old: 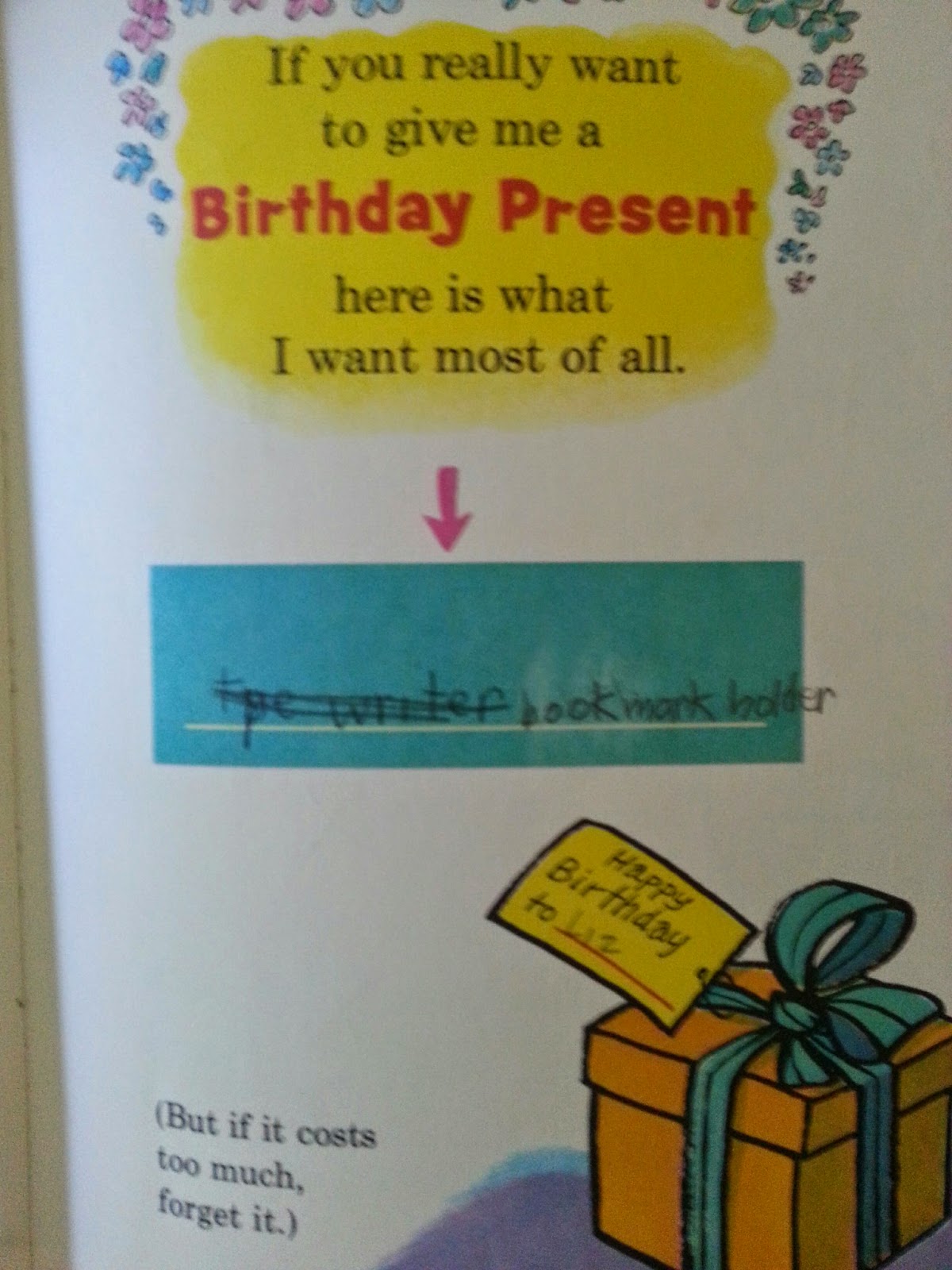 I probably felt presumptuous when I crossed out "typewriter" and filled in "bookmarker holder" (what the hell?) Once again, I was slipping out the door before anyone saw.

That being said, I'm more amused and curious at this point than simpatico when other writers kvetch and complain about how little money they make as writers. There's a lot of this going on -- particularly in the Huffpost hipster set. Evidently, exposure is the thing, and you have to sacrifice money in order to get it. Since when did writers presume that they'd make a living doing what they do? Has this ever been the case except for the minority? I love to think of William Blake, naked in the garden with his wife on the weekend, after a week of working his printing press. I swoon over Nathaniel Hawthorne, penning Rapaccini's Daughter  in the few hours left to him before or after his miserable job at the Salem Custom House. When he was fired from there, he penned The Scarlet Letter. I imagine Wallace Stevens might have grumbled a bit as an insurance salesman in Hartford, Connecticut, but that didn't prevent him from scratching out some of his most sublime poetry on scraps of paper throughout the day.

The other set of writers that make me raise my eyebrows are those that insist it's impossible to write when you have children - or that having children and raising them somehow lowers your intellectual capacity. Some journalist recently claimed that the best female writers only have one child. The wonderful Zadie Smith wrote a wickedly good riposte to that, here. And I'll never forget hearing the wonderful Carol Shields, who wrote many terrific novels, delighting in her five children and denying that they'd ever sucked any creativity from her.

The thing is, I'm not going to be a writer, when certain circumstances unfold, or certain people accept me or when I am paid. I am one. I'm doing what I most wanted to do since I was a very young girl, and I can be nothing but grateful for that and keep doing it.
Posted by Elizabeth at 4:30 PM