Sitting in a Car 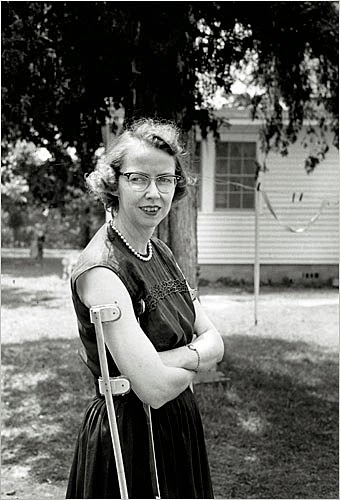 All my stories are about the action of grace on a character
who is not very willing to support it,
but most people think of these as
hard, hopeless and brutal.

Sitting in a car in a flowered dress, I was talking to you as if it were a natural thing, the give and take, the soft laugh, the absence of flesh. There was no talk of being centered, of allowing things to unfold, the kind of Buddha-speak to which those of us who spurn the spiritual gravitate toward as if it will save us. I sort of like the sexism in Updike and Fellini, I offered and I wasn't embarrassed. You listened even as your words tumbled over mine and mine over yours. It occurred to me in my heresy that it was because I sensed vulnerability, there, in the coarse language of Updike, the parade of female flesh in Fellini. You were the one that mentioned O'Connor, those horrific characters, the stories. I have this image in my mind, this character that won't leave me alone, I told you. Remember the scene in "The Graduate" where the mother throws her head back and screams? Yeah, you said, and then you made that noise that she made. She visits me all the time, I said. Not that mother but that woman. She needs a name. She has a helmet of hair. She laughs like that. Throws her head back and laughs maniacally. We had to stop talking. I had to go, get out of my car. There was nothing more than a string of words in that conversation. We aren't most people, hard, hopeless and brutal. There was everything, though, that was soft, of grace.
Posted by Elizabeth at 12:54 PM