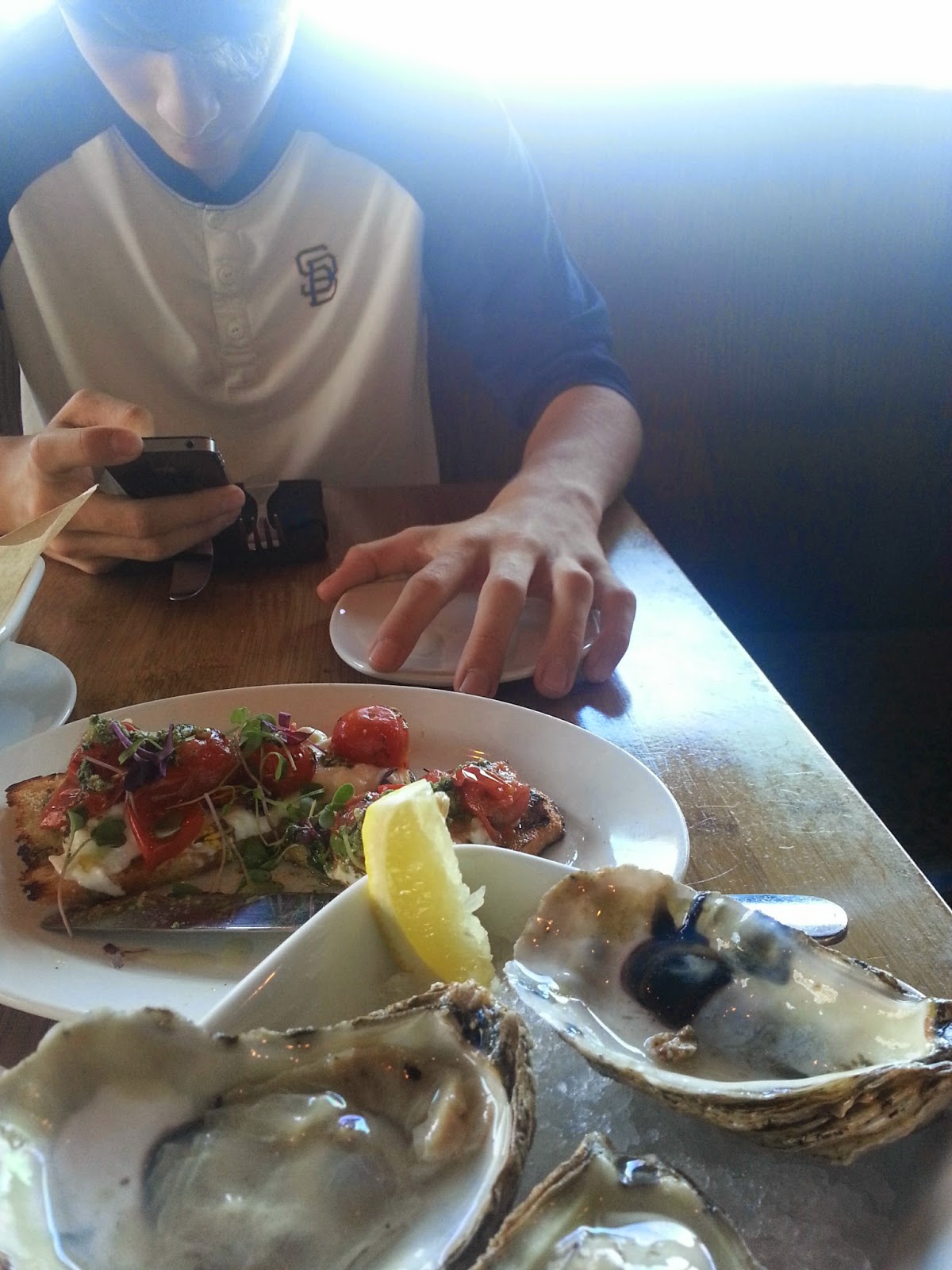 Can I just tell you that my son Henry is the easiest kid to hang around with in the universe? He's been bugging me for months to take him to the Mike Kelly exhibit downtown at MOCA, not because he's some modern art aficionado, but because his much-respected art teacher from school recommended it. I know nothing about Mike Kelly and agreed with the caveat that we'd stop for lunch. Henry ordered a burger and fries, and I had three Blue Point oysters and two pieces of toast with tomatoes and burrata. Then we walked over to MOCA and were basically assaulted by Mike Kelly. 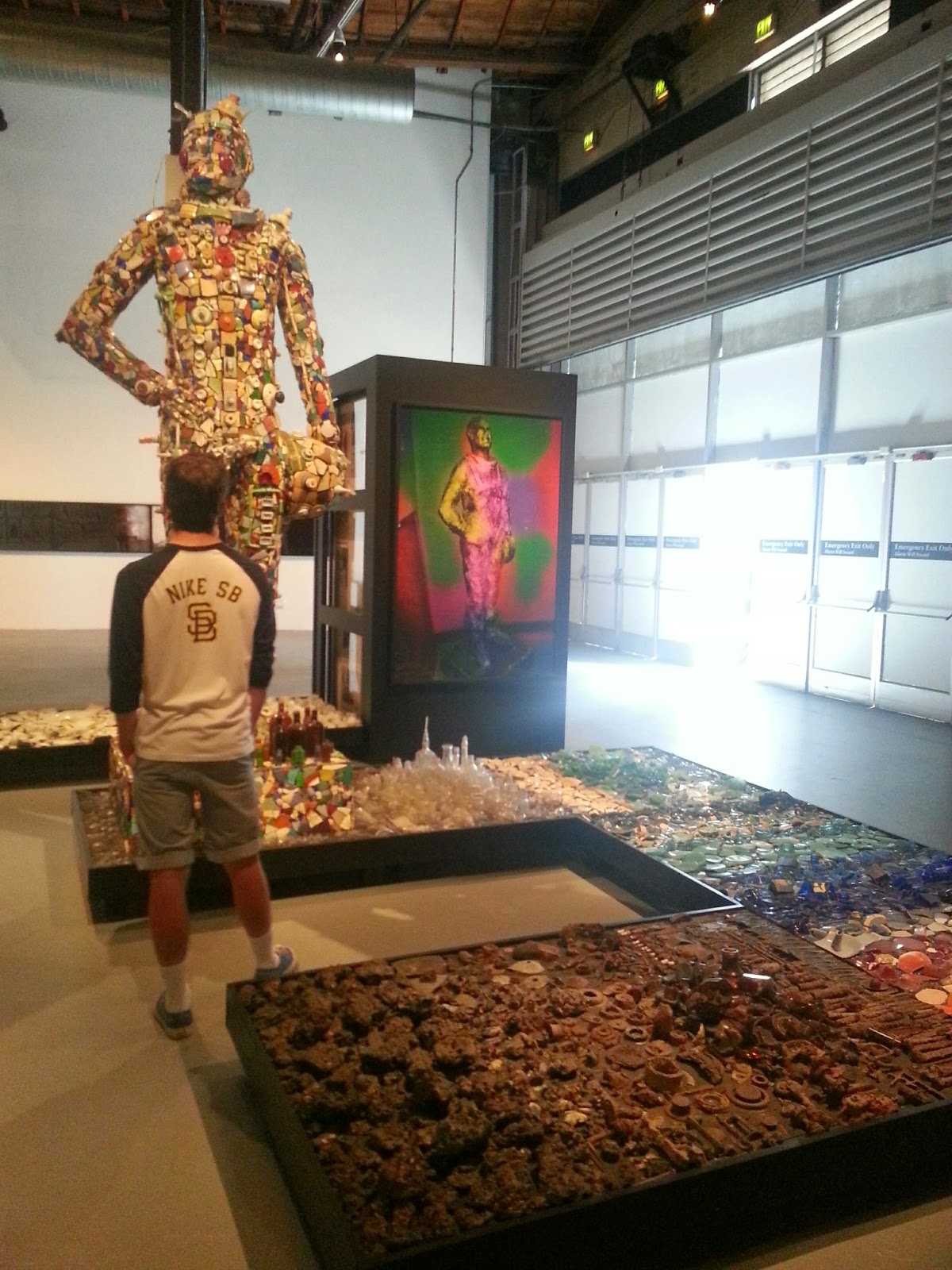 The above photo was in a part of the massive exhibit where photography was allowed, and it was really one of the only pieces of art that I "understood" and -- let's be honest -- liked. Do you know Mike Kelly? Evidently he's extraordinary, and the sheer amount of art, coupled with so many mediums (painting, sculpture, video) was certainly awe-inspiring, but most of it was utterly obscure for the likes of me, disturbing and downright overwhelming. At one point, I read a description of his installation of resin replicas of Superman's city, admittedly pretty cool, but what stood out on that little wall plaque were the words Sylvia Plath, and that was because they were the only ones I understood. I don't even like Sylvia Plath, but, god, I was grateful for her familiarity in that moment. I stood in front of a giant video screen and watched a little boy sitting in a barber's chair get his mouth smeared with shaving cream while the barber said things like Do you want a pussy mouth? while a pink-lipsticked effeminate man looked on, smiling like a clown. I tried to be open-minded, read the accompanying description in the hope of getting it, pushed away my horror and breathed. Do you think it's true that great art is disturbing? I'm not sure about that, but what I do know is that I glanced at Henry, and we did some telepathy and walked away. I longed for Oliver to be around to say something cogent like this is creepy and I could do this! and I hate museums! and art is stupid! -- but he's still shooting rifles and toasting marshmallows at camp. You know those guards that stand silently in museum rooms? I felt drawn to them, actually -- wondered whether they were quietly going insane with this exhibit. I smiled like a kind and sympathetic grandmother at them.

We wandered through rooms where you could barely hear, much less think, because of recorded screaming and industrial screeching and whining, and between the cacophony and the giant penises and poster art of people screwing -- well -- I was ready to get the hell out of Dodge. I will say that the corridor of paintings of great philosophers with quotes about criminality and art was pretty spectacular, and I learned that Kelly made a stipulation that this installation must culminate with a painting by a local criminal and that there must also be two boxes for donations to victims' rights groups.

We made our way out into the blinding sunshine and walked back to our car, stopping at a Japanese tea shop where I bought a coffee milk tea and tried to right my head on my body so that I could drive home. I told Henry that I either had a bad oyster or Mike Kelly made me feel queasy, and when he asked whether he could drive home (did I tell you that he has his learners' permit?), I said that I couldn't take any more harrowing, mind-bending experience for the day.
Posted by Elizabeth at 6:44 PM