A City Girl and a Squirrel and UPDATE 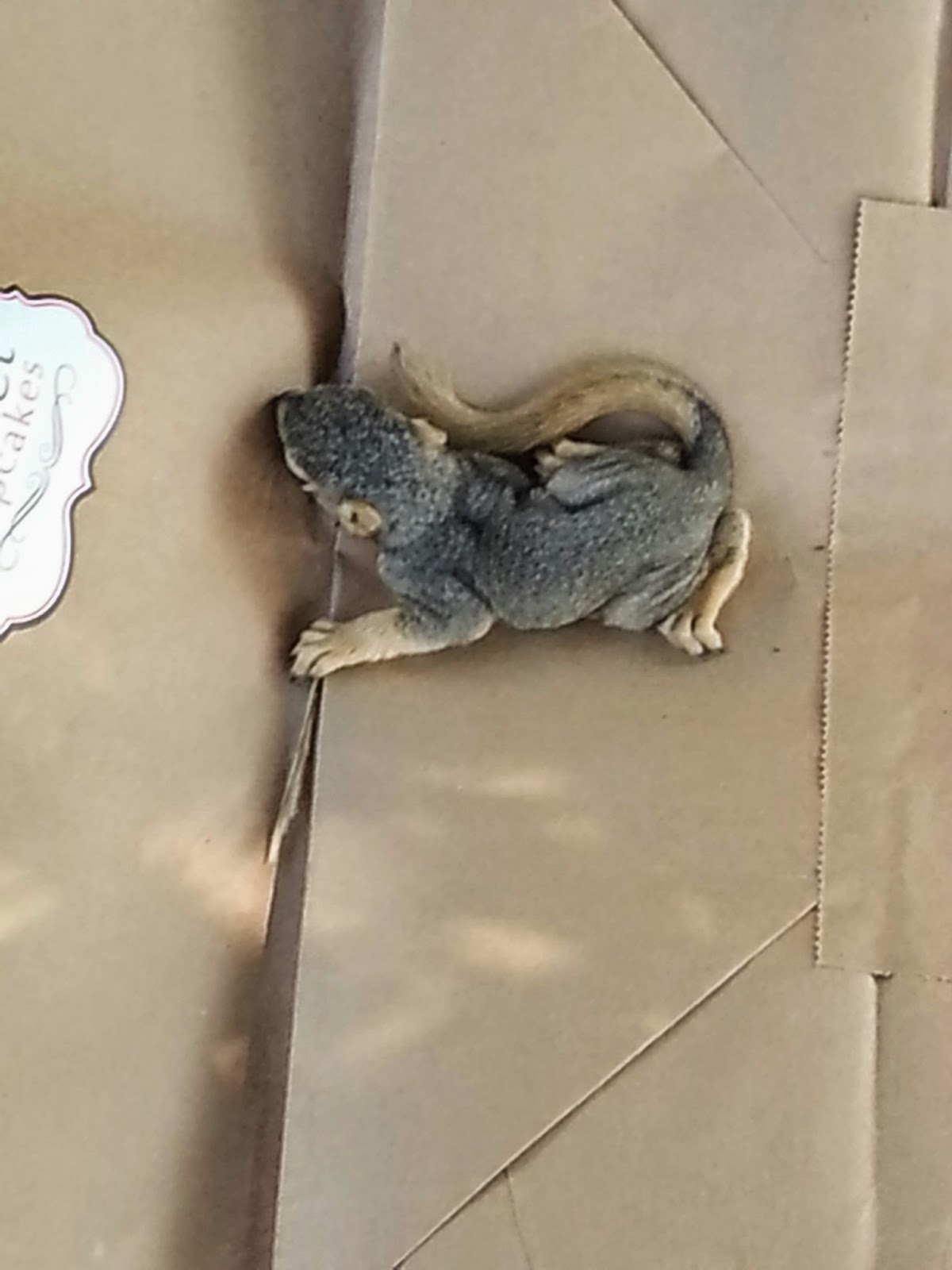 UPDATE: The squirrel has disappeared. Oliver noted that it was there one minute and gone the next, so we're hoping it recovered from the fall and scampered off to join its brethren.

That thar is a baby squirrel that might have fallen out of a tree that I nearly backed over but noticed as I walked to my car. I didn't scream out loud, but I screamed in my mind. In case you didn't know this about me, I'm a city girl. In fact, many moons ago, I had a roommate during my sophomore year in college who was a sweet, sweet young woman from Beulahville, North Carolina. Despite the fact that she had a Jesus is Lord Carolina blue frisbee pinned to her side of the room and I was the type gal who sometimes slept the night out, she never judged me nor tried to save me, and we became great friends. One weekend, she invited me to her home in Beulahville, and since I was dying to go to such a bucolic-sounding place and knew that I'd eat delicious food, I accepted. Her daddy was a turkey farmer -- he didn't have turkeys out in the dirt, pecking around (or is that chickens) but rather housed them in several vast football field sized barns. When you stepped inside, the din was outrageous. I think some people even wore earphones. There might have been millions of turkeys crowded in this giant barn, and the feathers were flying, the stench was outrageous, and I believe I raised my hands up to my ears and stood there stupefied. This was so many moons ago that I don't think we had expressions like organic farming or free-range, so when I stepped into those barns with my hands over my ears, a bit green at the edges, my roommate's daddy just hooted and hollered at me. He had the thickest of North Carolina accents and was as sweet as sugar on a stick, as my Alabama friend Sybil used to say, and later that day when he fiddled with his radio, he screamed at me, How'd ya like to get on my ham radio, city girl?

After screaming in my mind, I noticed that it was still moving so I ran inside and got Saint Mirtha who not only watches Sophie most Saturdays but is good in a pinch for things like taking a brown paper bag and scooping up a baby squirrel. I disappeared in my sexy Mazda and went to Trader Joe's, but not before posting that photo on Facebook with a request for advice on what to do. I got a bushel o' advice, my favorites being get it the hell outside from a friend in Nashville who apparently doesn't know me that well and thought I had brought the thing in my house, and Here in Texas they'd just throw him in the stew from a southern friend who always makes me laugh. Mostly people were helpful and suggested that I call wildlife rescue, and a few people kindly sent me websites that detailed How to Care for a Baby Squirrel, and when I opened up those links, I screamed again in my mind and immediately felt bad that I'm really not as good of a person as I might seem because, really, the last thing I want to do is nurse a baby squirrel back to life, even if it is dying a slow death on a bag on my front lawn.

Where, where are the coyotes that come down out of the Hollywood hills and kill small dogs?***

***I can't even imagine what Anonymous thinks of me now.
Posted by Elizabeth at 5:41 PM