*** I'm re-posting this because I don't have anything to say today other than some paltry words about how weird it is to read of the ALS organization's request to patent the words "Ice-bucket Challenge" as their own and to continue to wonder how effectively they'll use the nearly $100 million dollars that they raised. Since my reservations about non-profit foundations and the way they conduct business in this country were met so vociferously and rudely the last time I voiced them, I'll stick to issues that I know of very intimately, like this one. 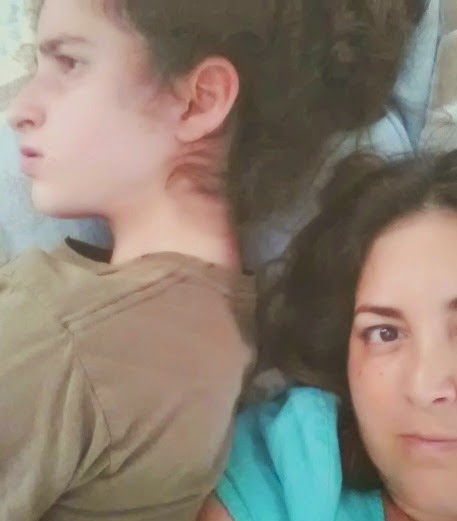 I read this article this afternoon as I languished, a bit sick, at home. For the record, I did do some part time work and home-schooled Oliver in American history and writing. The article was titled Aid to Disabled Kids Surpasses Welfare and states that the amount of federal money going to disabled kids through Supplemental Security Income programs has surpassed traditional welfare programs. You can imagine what this means. There will be people (conservatives) talking about corruption and those who milk the system and rely on government benefits, who don't use their bootstraps properly, who go on vacations when they find out they've qualified for disability and who are otherwise, losers. They will claim that the increasing numbers of children diagnosed with mental health issues, ADHD and other disabilities should actually be parented differently.

There will be people (liberals) blasting the conservatives for once again targeting the vulnerable, blind to white collar corruption and to military expenditures and waste that probably surpass the GDP of most second and third world countries, much less welfare and SSI expenditures. They will talk about the shrinking middle class, how the poor, truly cut off from welfare as it was once known, depend on SSI to even make ends meet.

What you probably won't hear, though, are the voices of those who benefit from SSI programs, many of whom are, literally, without voice. You won't hear about how difficult it is to actually get the benefits, how much education you have to have to parse out the requirements, and in the absence of education, the sheer stamina and persistence  to make sense of the paperwork, to navigate the system, to continue to care for the child with disabilities, to plan for her future with or without you. You won't hear the voices of those who have to continue to make a case for needing the money each year. You will hear that these people are working the system, making up disability so that they don't have to work, that their numbers are growing and America will go bankrupt dealing with them.

First of all, you know that I've a liberal voice, and my voice also happens to be Sophie's voice, since she doesn't have one of her own. Sophie began receiving SSI benefits monthly when she turned 18, the bulk of which I use to pay for the huge drug co-pays that her insurance company doesn't cover, any other medical treatments that her insurance company doesn't cover, her diaper wipes (I pay for her diapers with my own money even though they're covered under MediCal) and various toiletries, occasional clothing and apps for her iPad that she uses at school. Last month, I used part of the money to help pay for her two weeks at communication camp. I realize that some of this is luxury -- she could sit at home in her stroller (also partly paid for by SSI), next to me at my desk as I do my part time work instead of going to camp for three hours. Since I've never found a dentist that provides adequate dental care under Medi-Cal (Sophie receives dental insurance under Medi-Cal but none through our private insurer), I chose to continue to see our family dentist. It's expensive, and in order to keep Sophie's mouth healthy and because it's very difficult to brush her teeth adequately, we pay out of pocket every three months for a cleaning. The SSI money helps with that as well. Sophie's needs are met with a combination of government funds and those earned by her father and me, as well as generous donations toward her care given to us by my parents. I know that there are many, many people out there like us, making ends meet, not abusing the system and grateful for every bit of help -- both private and public. I know that without the combination of funding sources, many of us would have to resort to going into debt, to living far more stressful lives than we already do and to turning our children over to institutional care so that we, their caregivers, can try to find full-time jobs.

I understand that the system will always have corruption, and that some people will take advantage of that system, lie and cheat and steal in order to get something for free. I understand that part of my tax money is going to help the liars and the cheaters and the thieves, but I have a feeling that the vast majority of those that use these funds are doing so responsibly and because they very much need them. I understand that part of my tax money also goes to fund bombs and arms and war apparatus, even if I don't support those wars. It's a sort of price I pay to live in the country that I live in, a democracy where I supposedly vote for the representative that best works in my interest. I understand that people (and I know some of these people) who have millions of dollars but who are also veterans continue to collect what they're "owed," and while I believe that is pretty low-brow, even repellent, I also believe that my taxes go toward far more veterans who, after serving their country, are out of work, homeless, mentally ill, permanently injured or otherwise in need of them. For every Mitt Romney pumping money into tax havens or writing off dressage horses, there are countless businessmen and women getting into their cars and going to work, collecting their paychecks and paying their taxes.

What's the point of this post? Hell, if I know. I guess reading that article sent a frisson of fear into me. The fear is that the difficult job of caring for a person with disabilities in this country will get even more difficult. The fear is that this "difficulty" is really just a cultural construct -- that living in a nation that exalts individual responsibility to the exclusion of community makes my daughter's value recognizable only in dollar terms. The fear is the knowledge that she, and millions like her have to constantly prove their worth. I have certainly been proving her worth for the past nineteen years, and I suppose I'll have the stamina and grit to continue to do so, but damn. It's difficult.