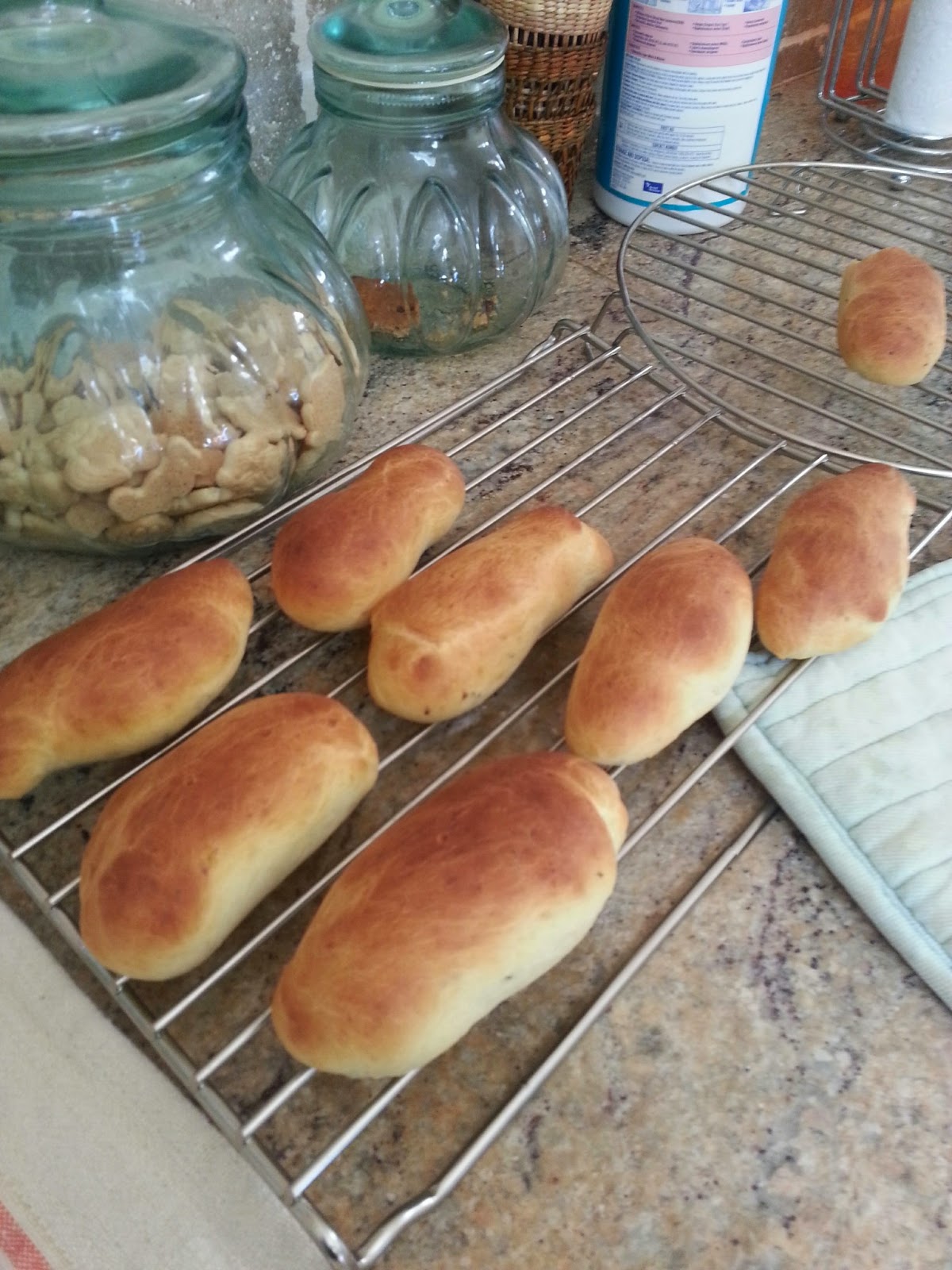 My cousin Joanne came down to Hilton Head this year to stay with her brother, my cousin Philip, who has a house a couple of doors away from my parents'. Joanne led a few of us in making and baking fresina, a regional sweetbread that our Italian family has been making for as long as I can remember. The dough is basically a yeast dough with tons of eggs, similar probably to challah, with the addition of black anise seeds. Black anise seeds are indigenous to the Calabrian region of Italy and are very expensive and difficult to find. We didn't have the black anise this year to make our fresina, and most would say that regular anise is a poor substitute, but that didn't stop our enormous gang from eating nearly the entire batch in a matter of hours. It was really a scene from the children's book The Little Red Hen, as only Joanne, Oliver, Charlie and I helped mix the dough, watched it rise, shaped the fresina, let them rise and then baked them, while the rest of the cousins played cards, went to the beach or napped by the pool. The moment they came out of the oven, though, redolent of yeast and a faint licorice, the fresina were grabbed and wolfed down in seconds. 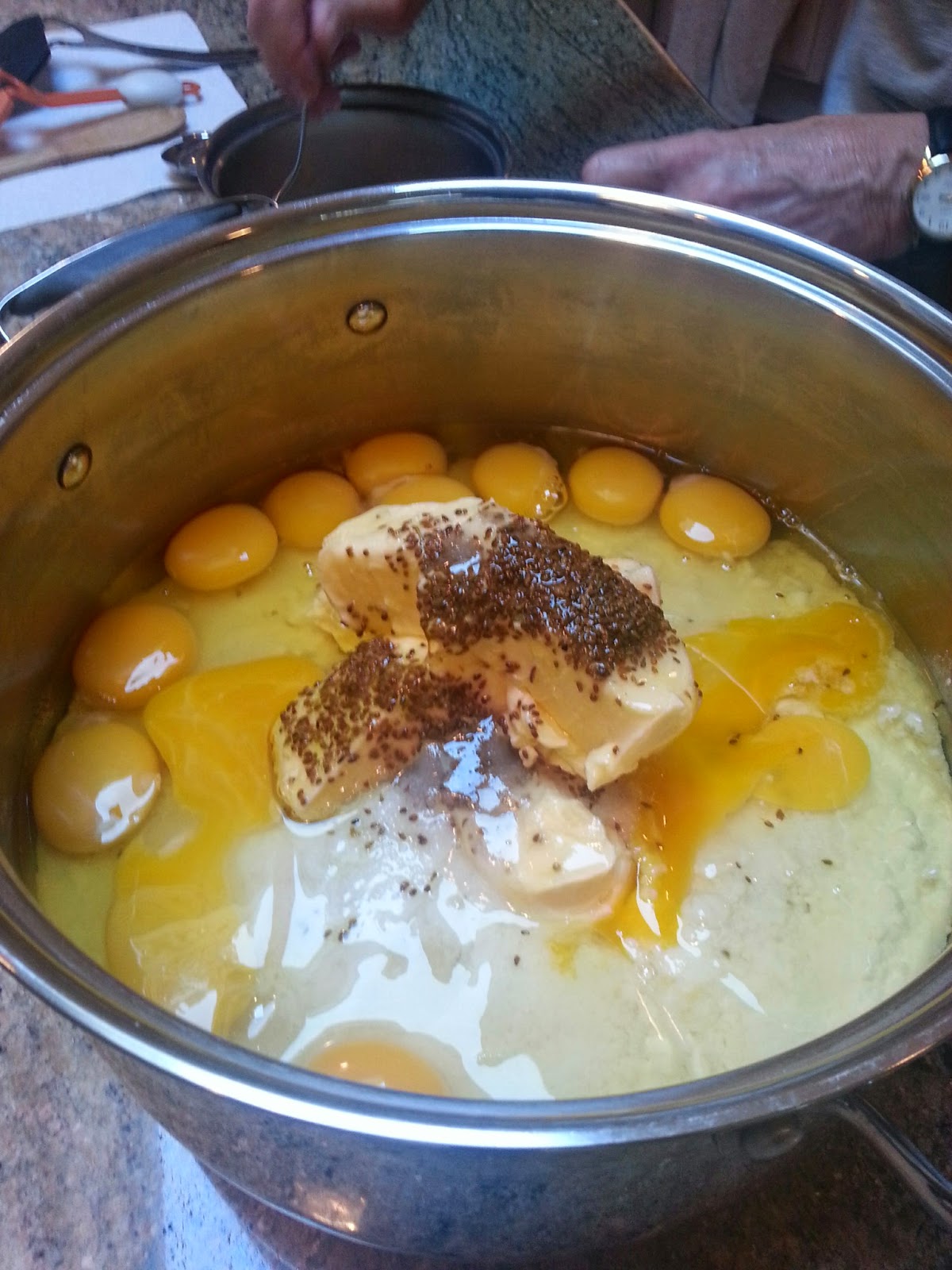 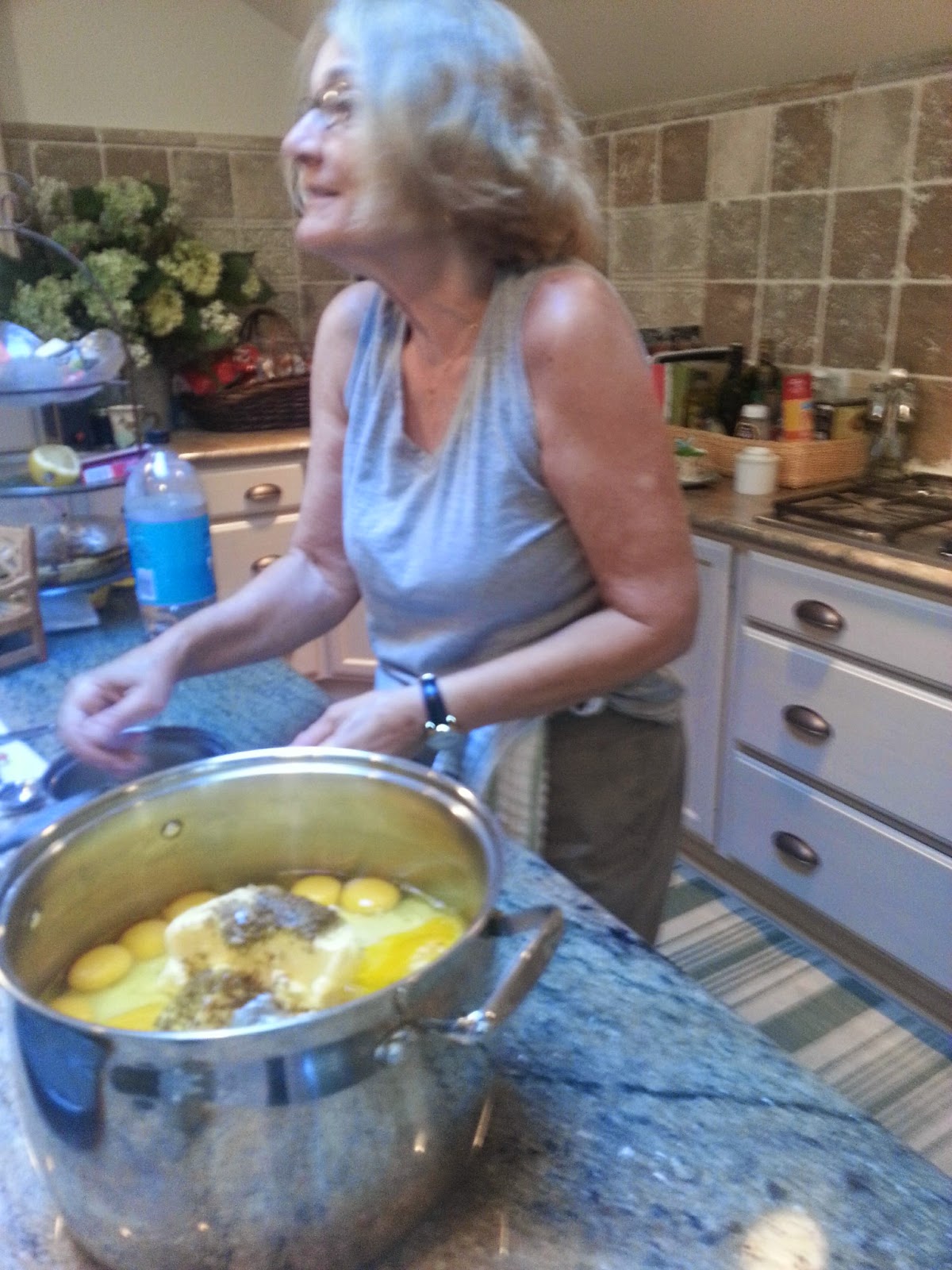 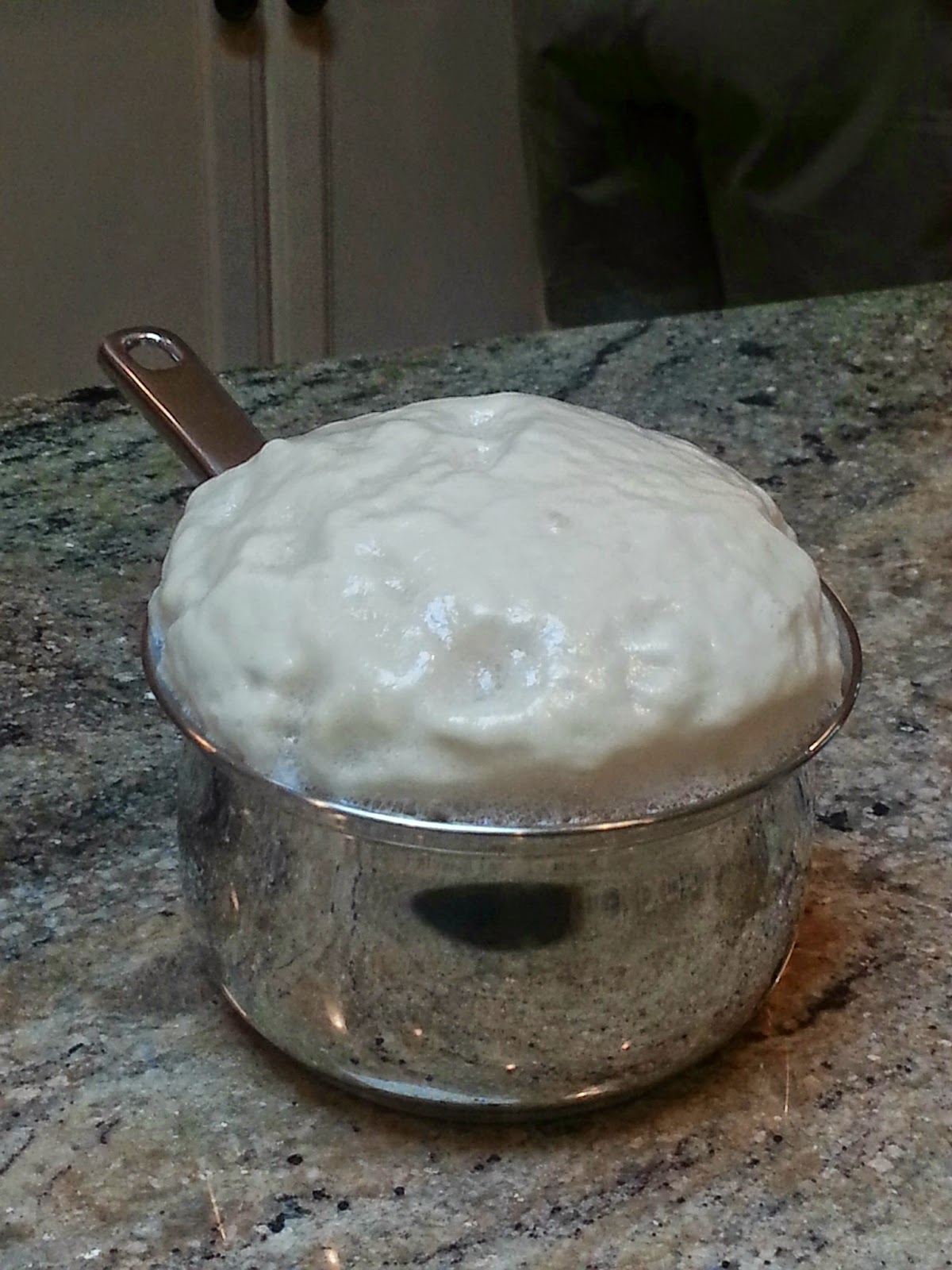 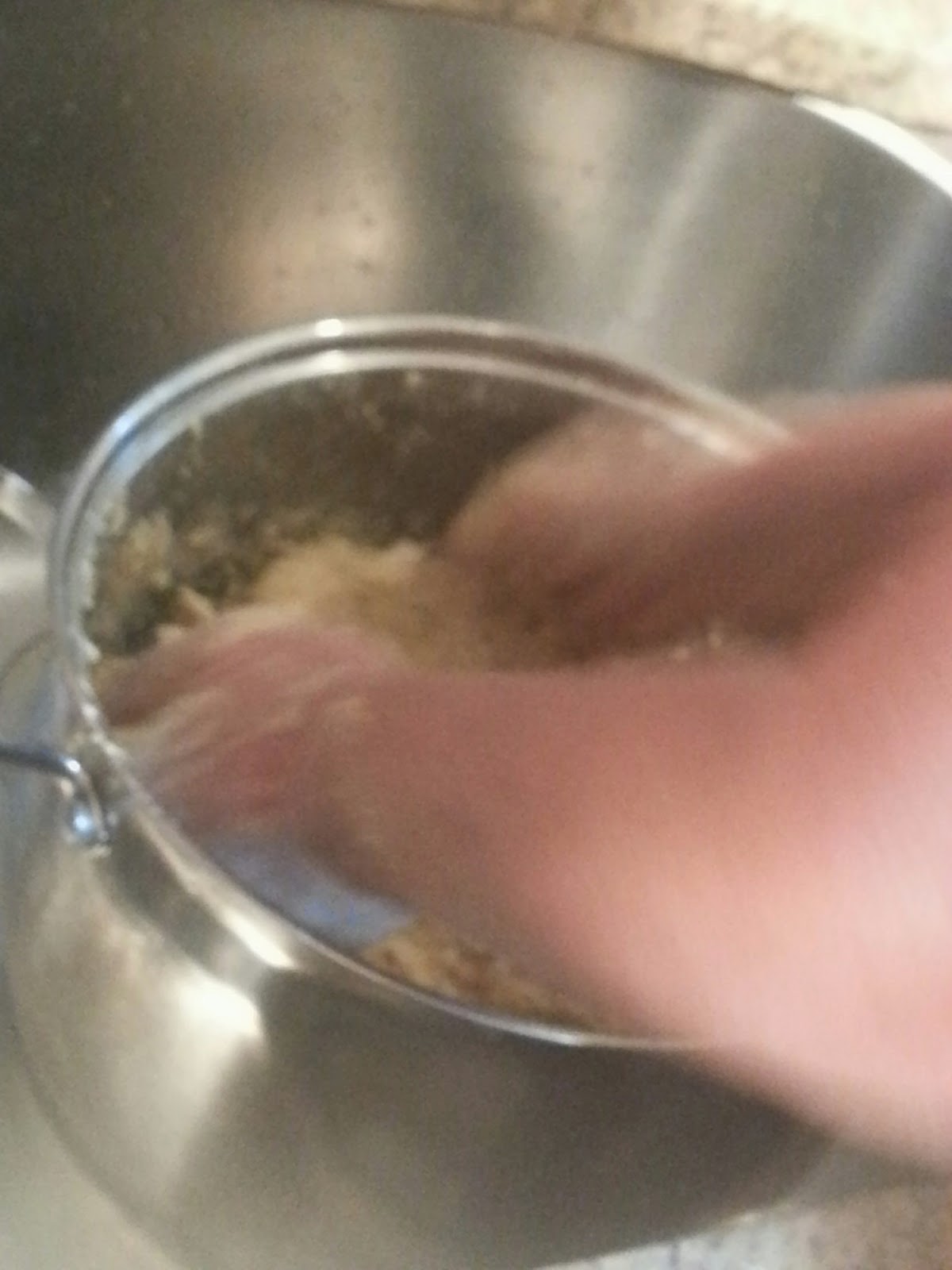 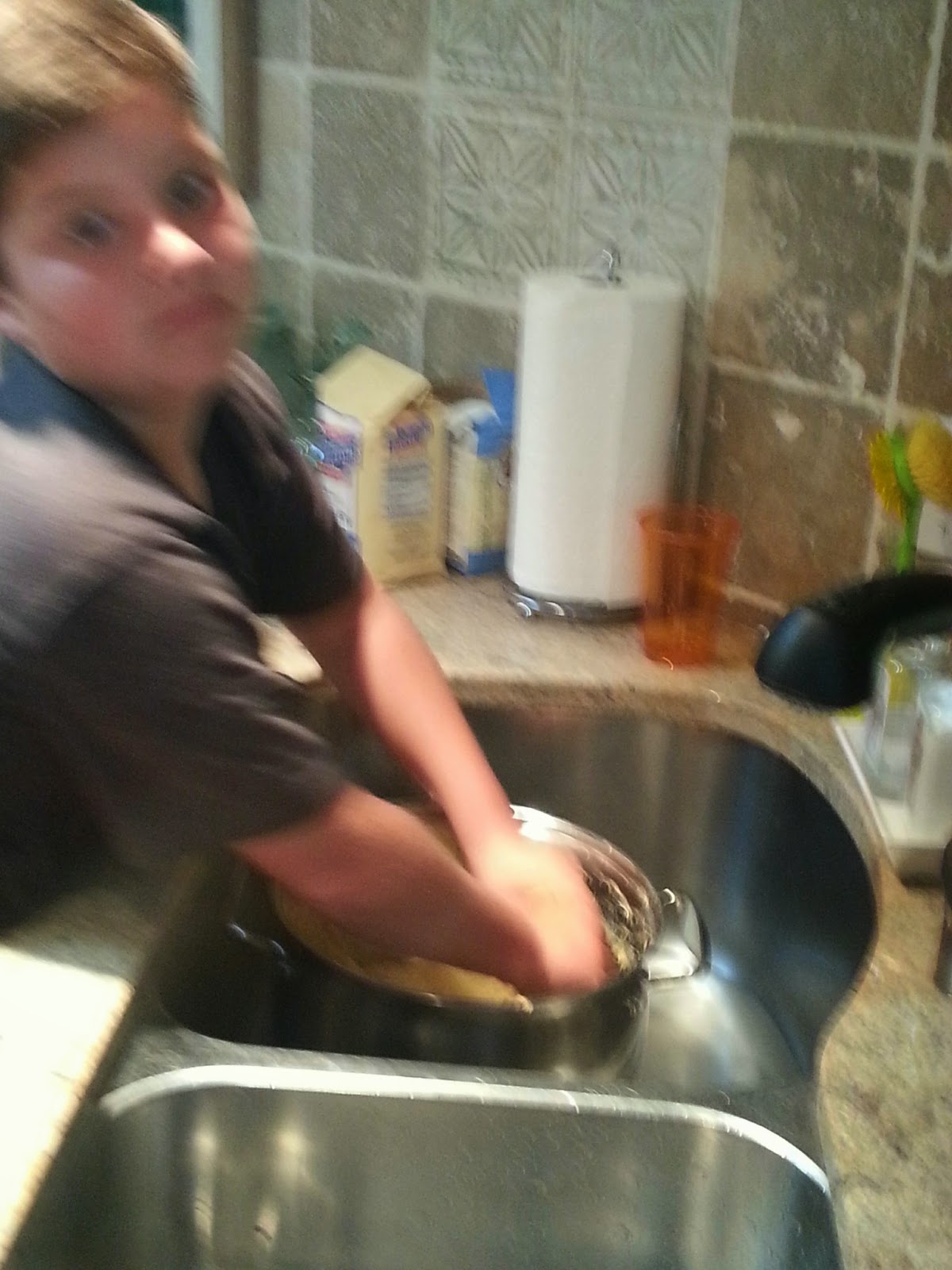 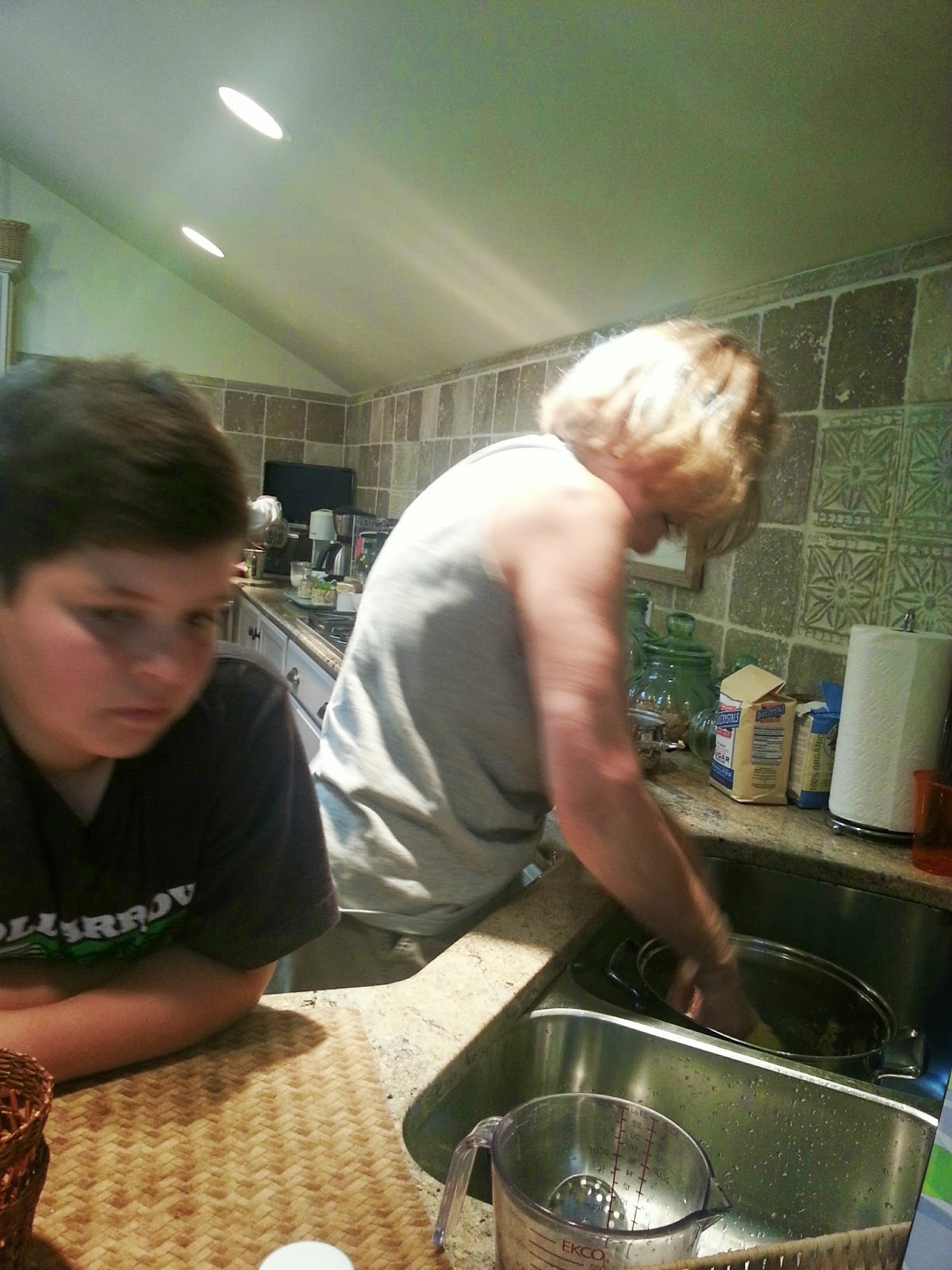 Here's Joanne, scraping the dough off the wax paper that lay on top of it for the rise. Nothing is wasted. 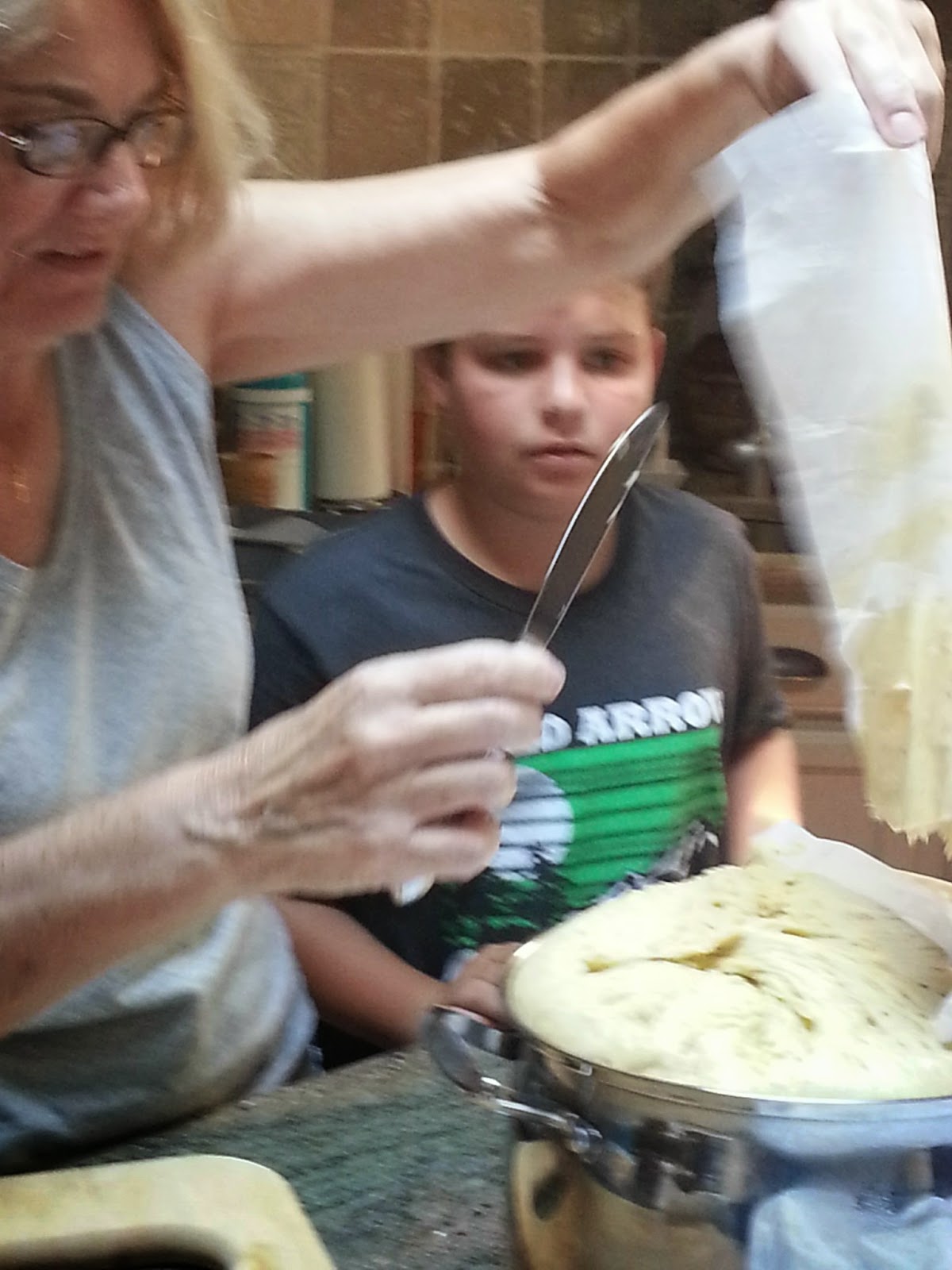 I was proud of Joanne for letting the guys shape and roll the fresina. In the past, her militancy and cleanliness have prevented this. I think she realized very quickly that these guys are little Italian-blooded pros. 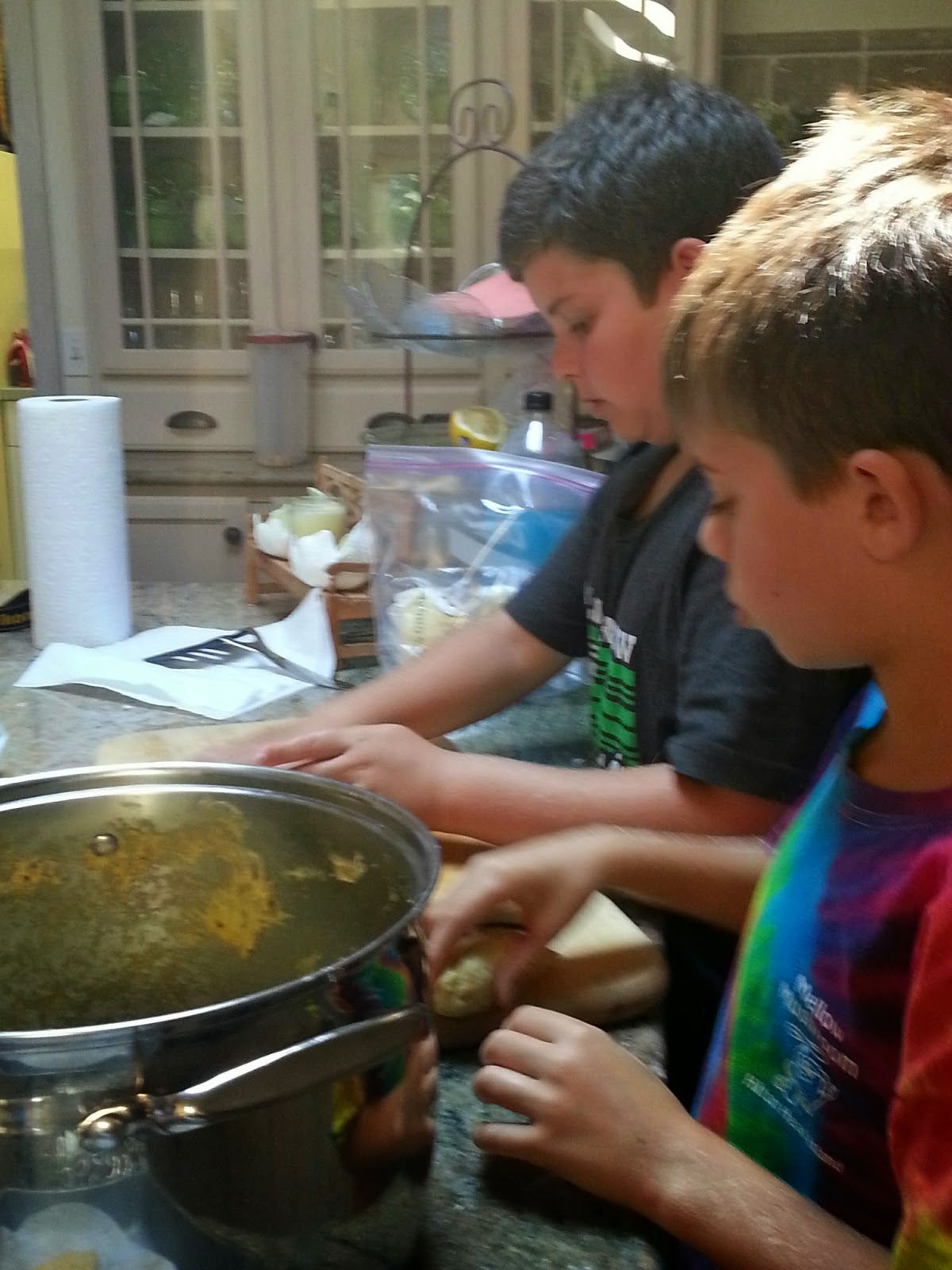 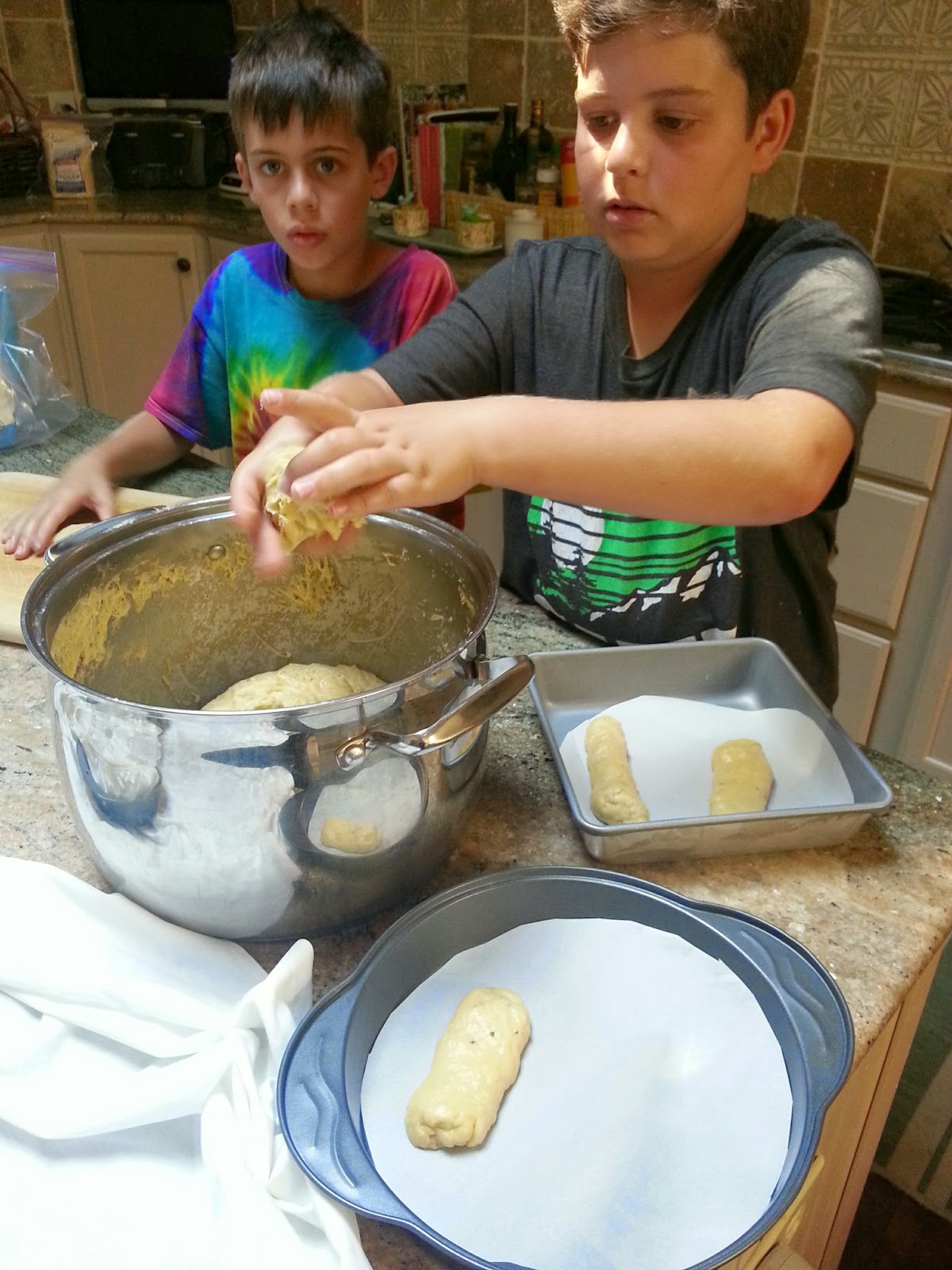 When Joanne asked for a clean sheet, again -- that's the way we do it, my father brought her one and told her that he'd taken it off the bed, and when she was finished, she could put it back on. This is probably tradition as well, and I can imagine my credulous grandmother would probably have screamed in horror and begun to pray if the same joke was played on her. Constant badgering and joking is still how we do it. Here are the shaped fresina ready for a second rise and then baking. 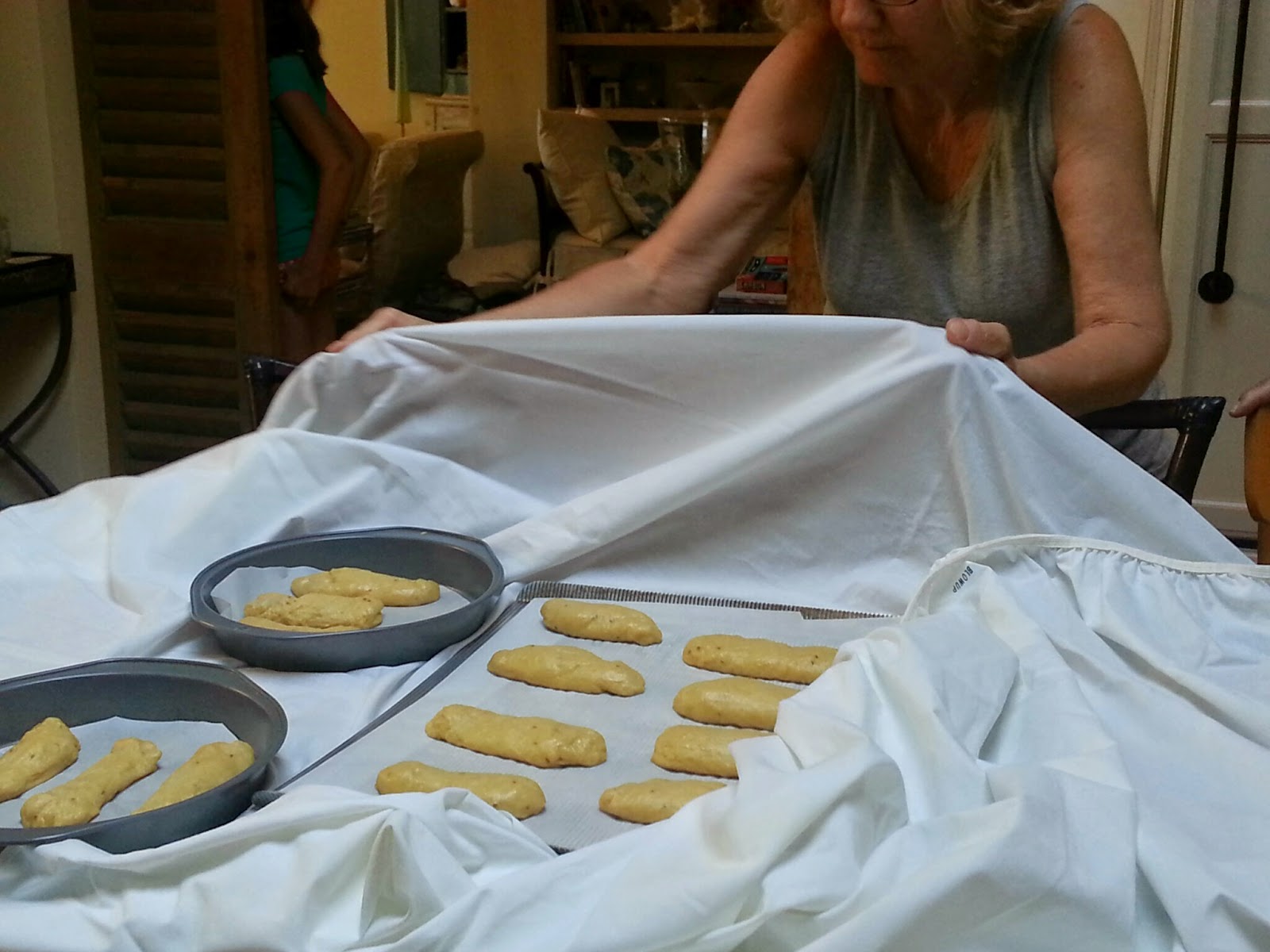 Here's my father and Joanne, probably arguing over the clean-up. 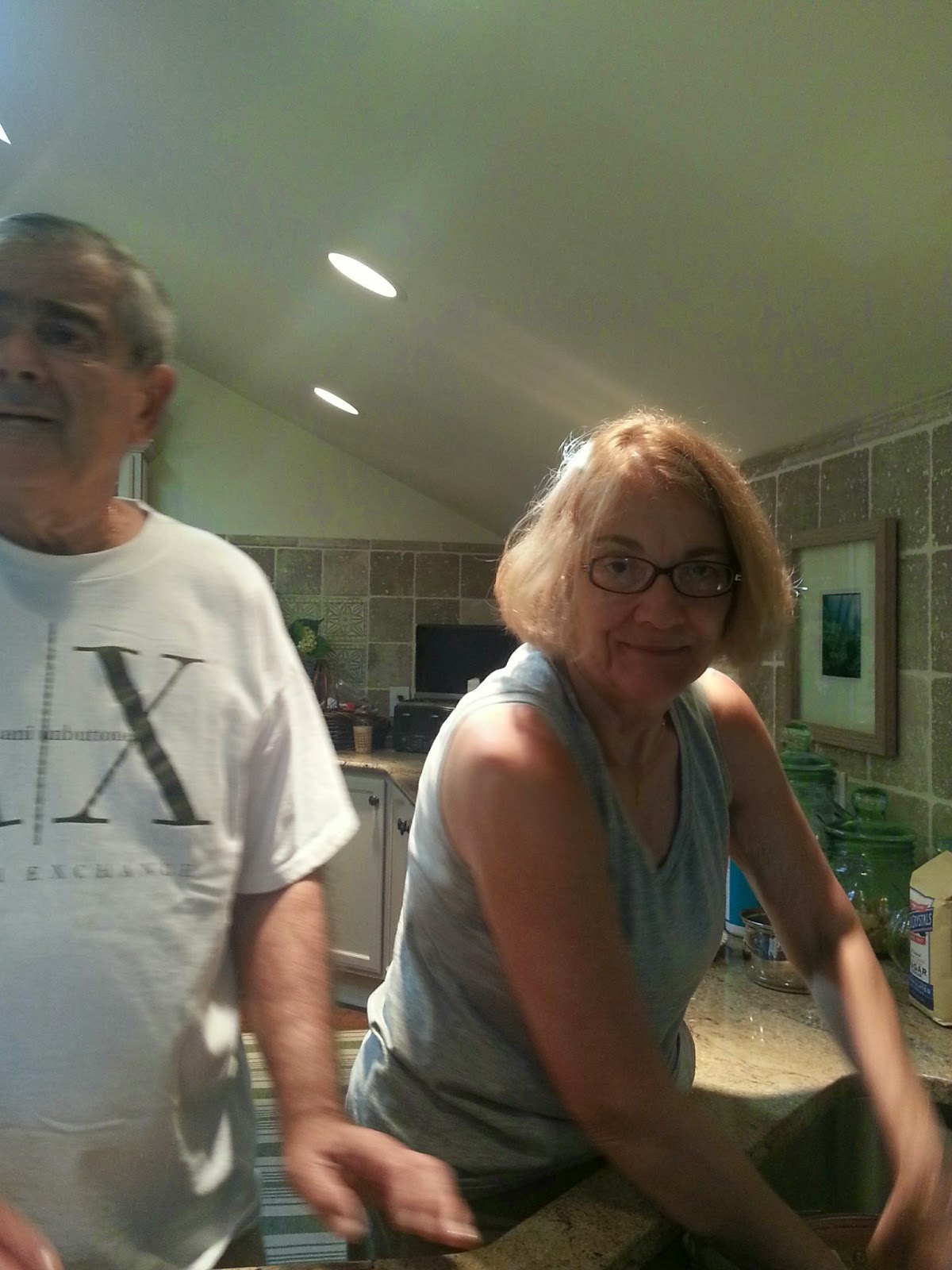 The finished fresina are pictured at the top. We spent a few minutes debating on how many to split in half and then re-bake, because this version is particularly good for dunking. 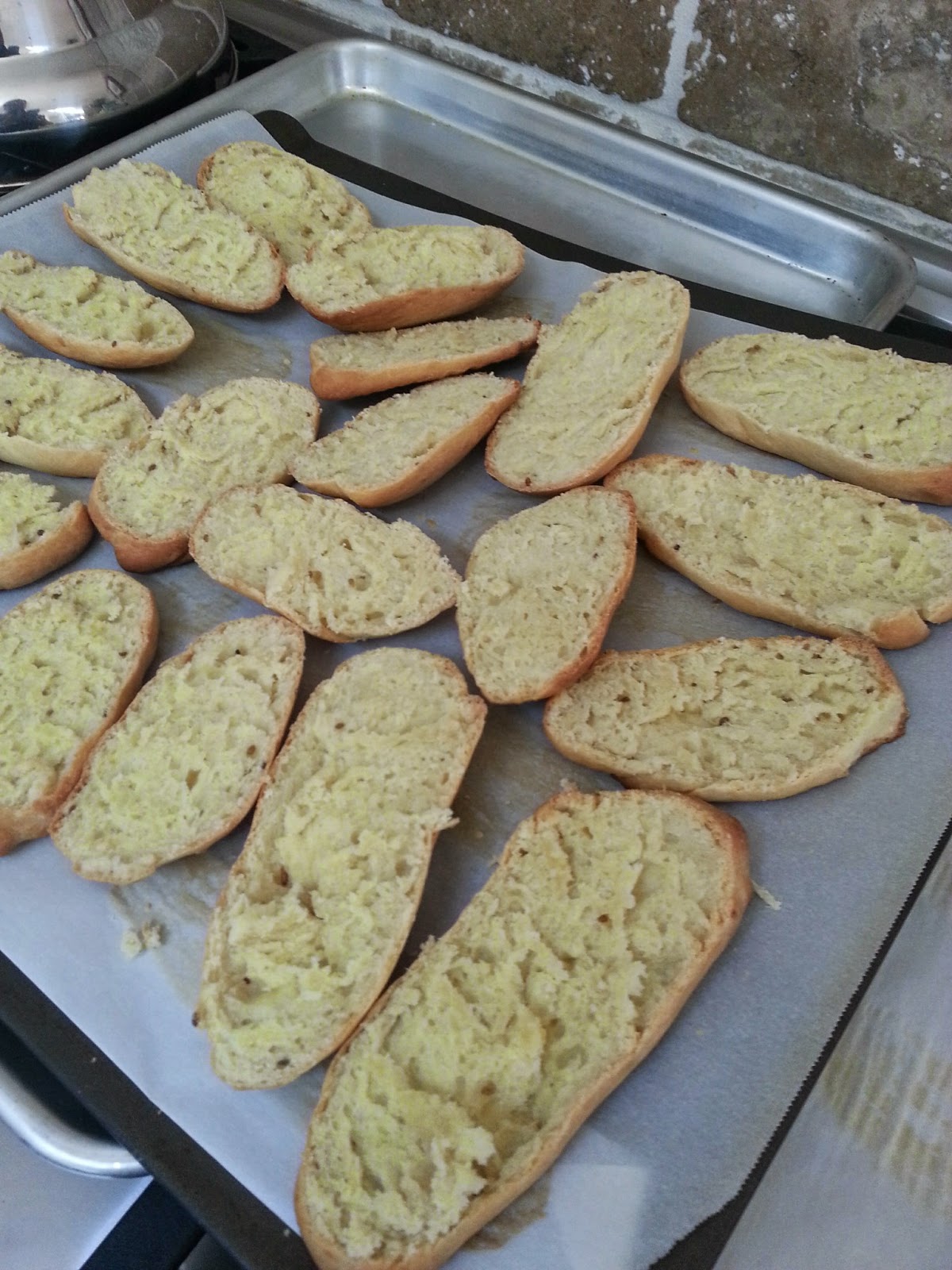 '
My father evidently got a hold of most of those and stashed them somewhere in his bedroom, along with the home-made soppressata that Giuseppe, Joanne's husband makes, a knob of mozzarella from Arthur Avenue in the Bronx, and his personal beach chair. You have to take these kinds of precautions when there are 24 people roaming about your house for a week.
Posted by Elizabeth at 11:03 AM