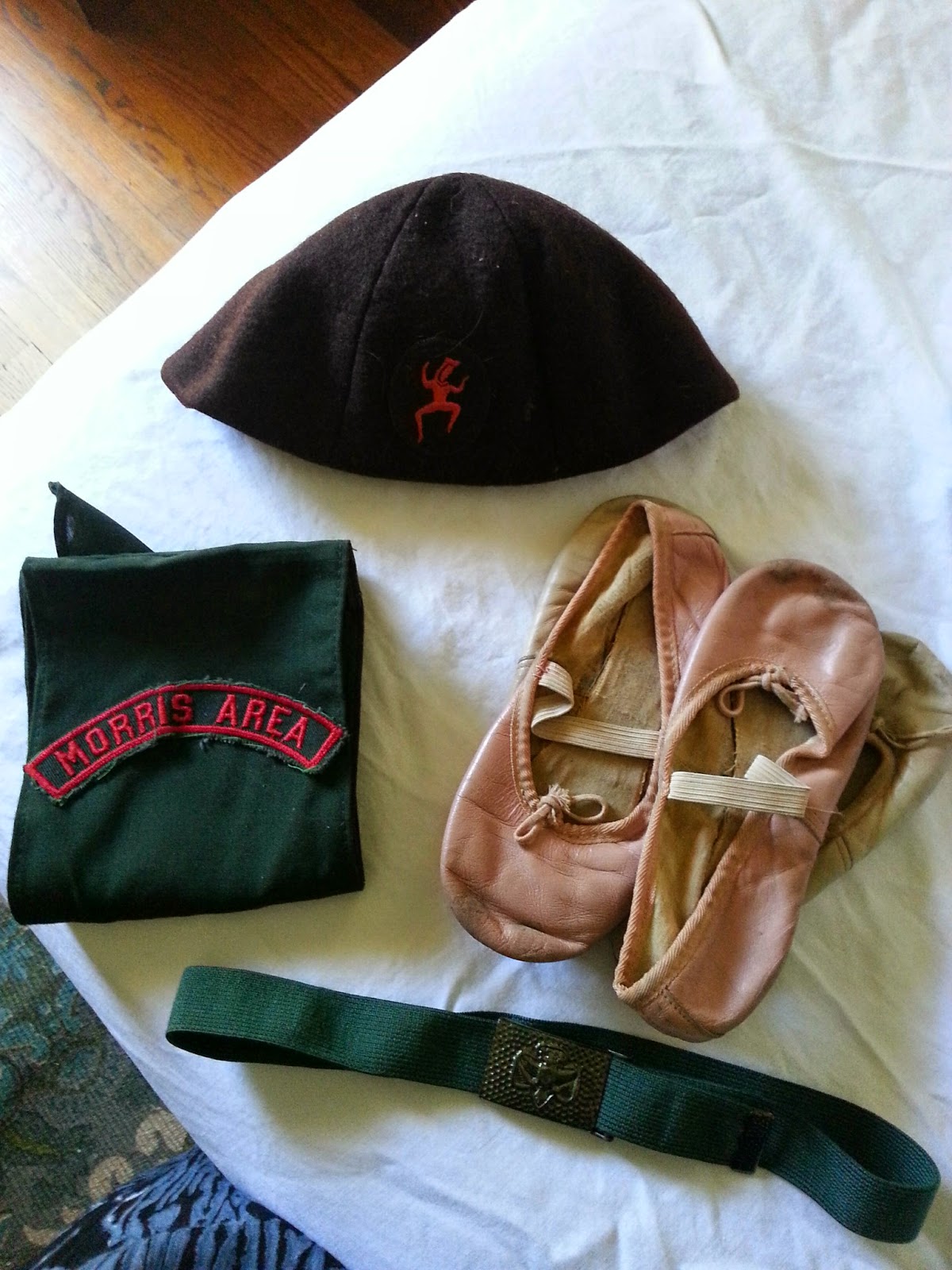 The other day I unearthed a box that was underneath my bed -- yes, it was buried under my bed, covered in dust. My father had sent it to me some years ago, and I don't think I had ever opened it or really looked at the contents. I unfolded my white eyelet high school graduation dress from 1981, my cream-colored (perhaps it was once white) First Holy Communion dress from 1970, a white pinafore that I believe I wore as part of my Dorothy costume from my starring role in the school play in fourth grade, 1972, my Brownie uniform, my Girl Scout uniform and the above accessories. Other than a surreal horror at how tiny , truly tiny I was, not just in second and fourth grades but in my last year of high school (honestly, I swear that I could no more pull that thing over my THIGH much less pull it over my breasts and shoulders and zip it up), I was cast back into intense nostalgia for childhood. On throw-back Thursday last week, I posted a photo of myself from sometime in the late 1980s on Facebook, and more than a hundred people "liked" it. Comments included many exclamations of wonder -- Wow! -- which inevitably made me think have I changed that much? As evidenced by that tiny white dress, well, yes. But when I peer closely at the photo, looking for the me that is myself, I see her, despite the superficial changes. I've mused with girlfriends about unsnarling our identities from our children as we and they age -- how difficult it is to figure out and find, reclaim that me that was before the me that is today. Sometimes it takes peering into photos to find ourselves, not so much to remind ourselves of that youthful beauty but to remind ourselves that life, while transformative, has not irrevocably changed who we are in the most essential sense. I do this with photos of my children, too -- flipping through photo books that I lovingly made when they were babies and toddlers, scrolling through the thousands I have stored on my computer -- Sophie, Henry, Oliver are still there, in the eyes, in the smiles, in the people they've become.

But what do we do with all this stuff? Do I dry-clean the dresses and uniforms, go to The Container Store and buy that preservation tissue and boxes in which to place it lovingly for my progeny? It's hard to imagine either Henry or Oliver will take along this box, open it and feel anything, really, about it other than oh, god, more of Mom's crap. And even though it seems as if all things eventually go there, I am struck by the fact that Sophie, my only daughter, the obvious person to receive these things, will obviously have no need for them or awareness of their "value," if she even lives longer than me. After all, despite the fact that I've saved many bits and pieces of her own life -- darling baby clothes, my favorite of her many beautiful shoes and outfits that I splurged on over the years, some of her "artwork" from early years in preschool and kindergarten when I had no idea how things would turn out -- they really please and mean nothing to anybody but me. Perhaps there's a lesson in that, but I'm not sure. I won't throw any of it right now, though, heavy as it is, invested still with emotion and longing and reminders.

Posted by Elizabeth at 2:44 PM