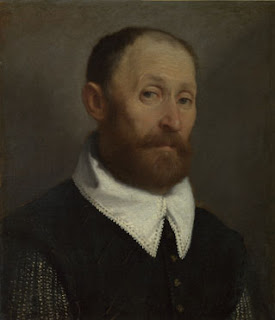 Portrait of a Man with Raised Eyebrows

It's the beginning of winter down under, and apparently our fellow planetary citizens in Australia are preparing for flu season. A friend of mine who works for the federal government recently sent me an article issued by the Chief Medical Officer of the Department of Health and Ageing of the government of Australia. This is the title of the letter:

The letter states that a much higher rate than usual of fever with convulsions has occurred this season, following the administration of the vaccine in children under the age of five years. The rate of fever with convulsions in any given year is generally less than 1 per 1,000 children. This year, the rate is 9 in 1,000, an increase alarming enough to warrant investigation of the safety of the vaccine which includes notifying the CDC here in the United States and our own Department of Maternal and Child Health. You can read the full text of the letter by clicking "an article" above. You can also read more about it HERE.


The reason why I've posted this is NOT to state that I am anti-vaccine, but to highlight what I believe to be the NECESSITY of safer vaccines for all of our children. In the endless debate about vaccinations, calm and rational discussion is almost always foregone for extreme hype and simplification. Those of us who do not vaccinate our children (in my case because of the unexplained seizure disorder that developed soon after infant vaccinations in my daughter) are often vilified, called "irresponsible" and worse. Our voices are often lost or misinterpreted, drowned out.

Posted by Elizabeth at 1:45 PM