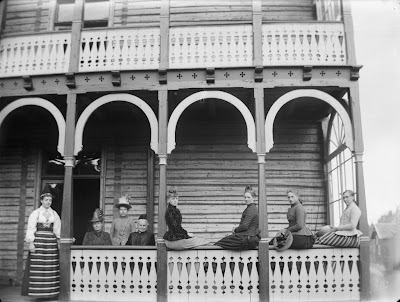 Women "resting" at a Norwegian sanatorium
There was a fascinating article in yesterday's New York Times about what used to be called a nervous breakdown and is now referred to as vital exhaustion. You can read the article HERE. My favorite quote from it is this:


In recent years, psychiatrists in Europe have been diagnosing what they call “burnout syndrome,” the signs of which include “vital exhaustion.” A paper published last year defined three types: “frenetic,” “underchallenged,” and “worn out” (“exasperated” and “bitter” did not make the cut).

Exasperated and bitter, two words that can be oft-used to describe yours truly did not make the cut.

Then what does that make me?

I've often fantasized about the old days of rest places and sanatoriums, the kind featured in a Fellini movie, perhaps with people dressed all in white, the ill draped on lounges in front of pretty vistas, the workers floating about with small cups of water and tiny, white pills. 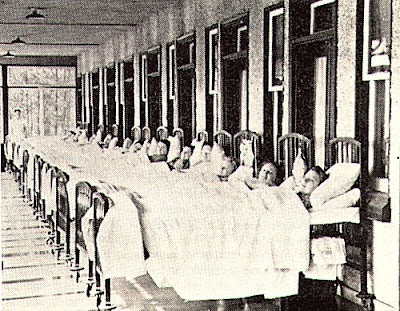 I know, I know, that's not the way they were. And I'm certainly aware of the gravity of mental illness.
I spoke with The Adult Neurologist last week and she recommended stopping the birth control that she prescribed for Sophie about three months ago. She said it sounds like it's making her worse.
Oh, good God.
I don't feel vitally exhausted but I would like a rest from it all.
Posted by Elizabeth at 6:00 AM