You can't take the Catholic school out of the boy, I guess

On Saturday night, I went to the big yearly fundraiser for my boys' charter school. For those of you new to my blog, both Henry and Oliver attended Catholic school for years (Henry for four and Oliver for two). I wrote about why I took them out of Catholic school and transferred them into a progressive charter school HERE,  if you want to read more, but back to the fundraiser --

One of the things that the children at the school all do in preparation for the big night is an art project. There is a class project that is auctioned off for hundreds and hundreds of dollars at the live auction, and then there are the individual pieces that one can bring home for a small donation. When I walked into the event, I saw the second and third grade projects arrayed on long tables and inwardly groaned. Not only were there at least a hundred of them, but they appeared, at first glance, to be junk sculptures -- those cardboard box dioramas with bits of straws and clumps of glue, toothpicks and paint and toilet paper rolls arranged artfully. I sighed and wondered where in the hell I was going to put Oliver's latest masterpiece (if you're the parent of a very young child, trust me -- you'll get here, one day) and moved on to buy a ticket for the bar.

Later that night, as I was leaving, I stopped at the table to pick up Oliver's art piece. It was only then that I saw the title of it:

I really couldn't possibly do justice to the thing, without posting a photograph. So here it is in all of its Inquisition-like glory: 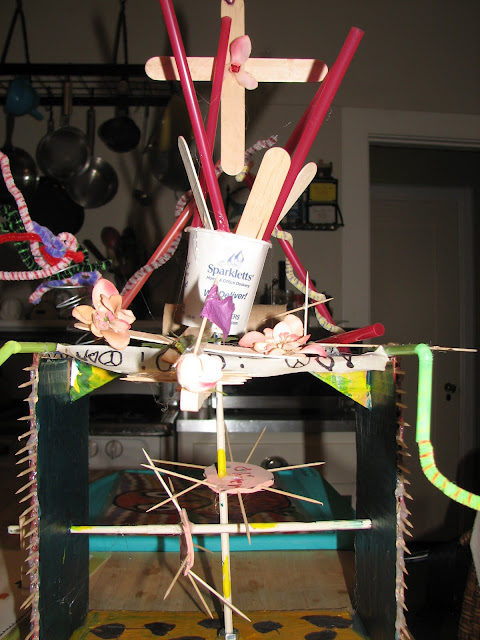 There's a banner there on the top with peace signs, and this: ! GOD ! There's a simple machine at the bottom, a sort of crank and gear shift that rotates the two crosses at the top. The third graders evidently studied simple machines in social studies and Oliver used his knowledge of them to great affect (or is it effect?). The walls of the box are lined with carefully-placed tips of toothpicks -- and I'm telling you, those things are SHARP. The crosses are each adorned with a plastic flower and burst out of a Sparkletts dixie cup. I stood in wonder at my son's creation and then paraded it around, exclaiming and laughing over its weirdness. 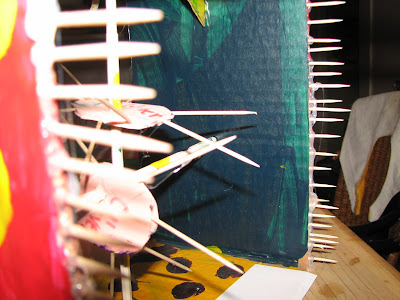 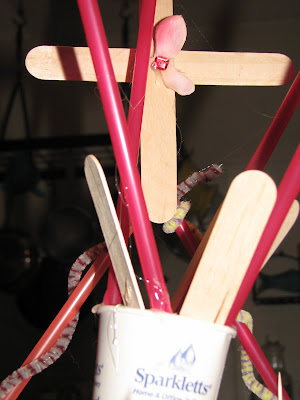 When he woke up this morning, Oliver asked me what I thought about it.


Spectacular, I said. Tell me about it.


Oliver told me that he wanted to create something that praised God and everything that He had given him. He had specifically put plastic flowers on the cross for that reason. He wanted to protect God, too.


From what? Henry asked. He was clearly bored and annoyed.


From the Devil, Oliver replied. That's why there are spikes.

Honestly, I have some amazing children, no?
Posted by Elizabeth at 6:00 AM